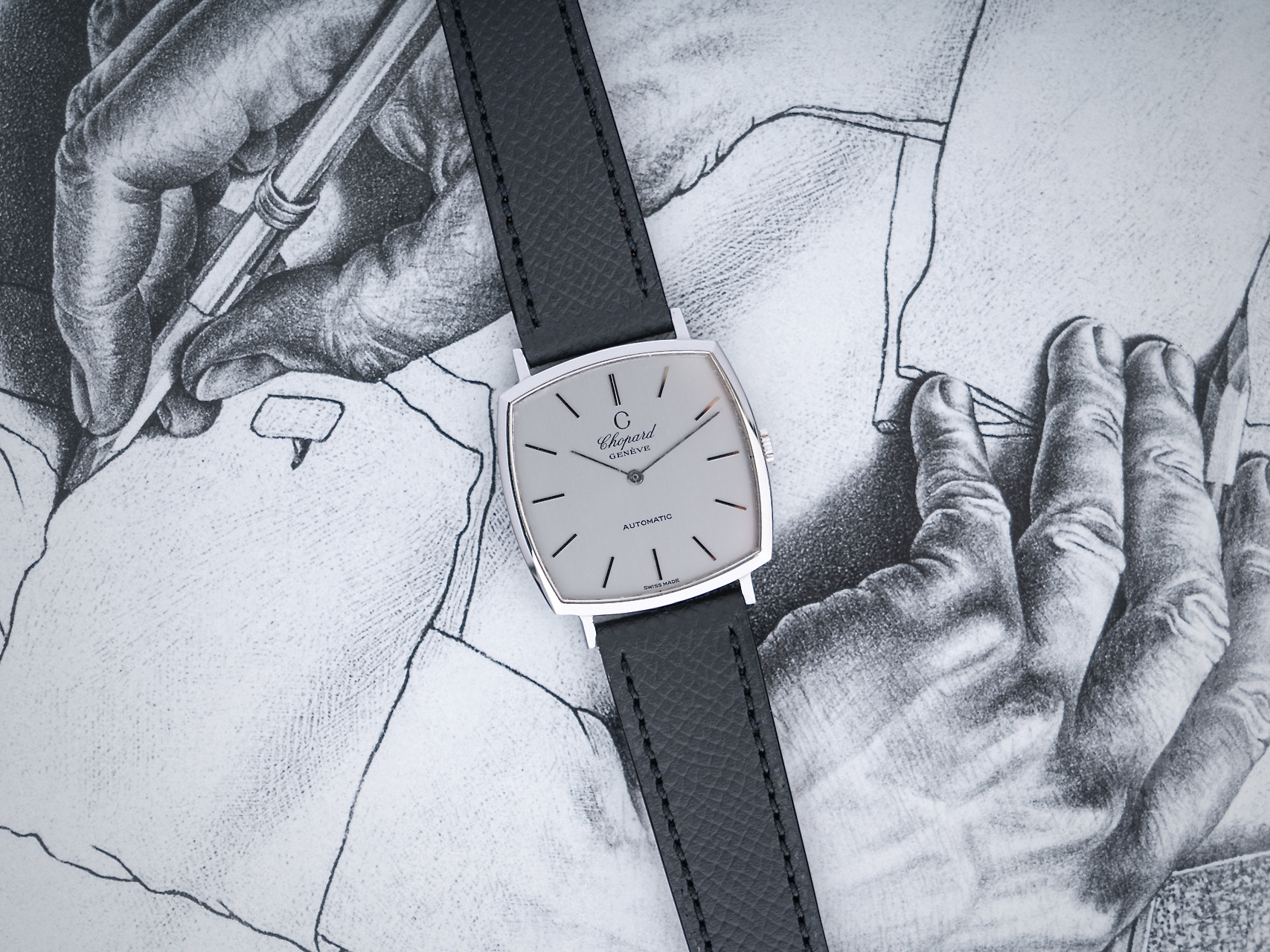 Chopard is one of the most incredible success stories in recent watchmaking history. Like all stories, it has a beginning. For Chopard, it all began in 1860, when the firm was founded by Louis-Ulysse Chopard (1836-1915) at the tender age of 24. His passion for watchmaking was visible in his innovative designs and refined craftsmanship, making it that he very soon could count the rich and famous to his clientele, including people like Tsar Nicholas II of Russia. With its Chronometers, Chopard established a reputation of reliability, even becoming the official watch supplier of the Swiss Railway Company. The company thrived, as in 1915, after his death, his son Paul-Louis Chopard would take over the reins, continuing its success until World War II made things difficult.

This offered quite a challenging setting for Louis-Ulysse Chopard’s grandson, Paul-Andre, to continue the firm that he became in charge of in 1943. The company continued to produce very high-quality watches yet on a much smaller scale, and as none of his children wanted to succeed him, Paul-Andre decided to sell the family firm. A buyer was found in the German goldsmith and watchmaker Karl Scheufele III. Keen on expanding the jewellery and watchmaking firm ESZAHA that he already owned, he recognized the potential of Chopard. While the quartz crisis ravaged the  Swiss watch industry, Chopard was returning through its golden years under Louis-Ulysse Chopard. With a clever collection of jewellery and watches, Scheufele quickly increased the name recognition of the brand while at the same time establishing an influential clientele. 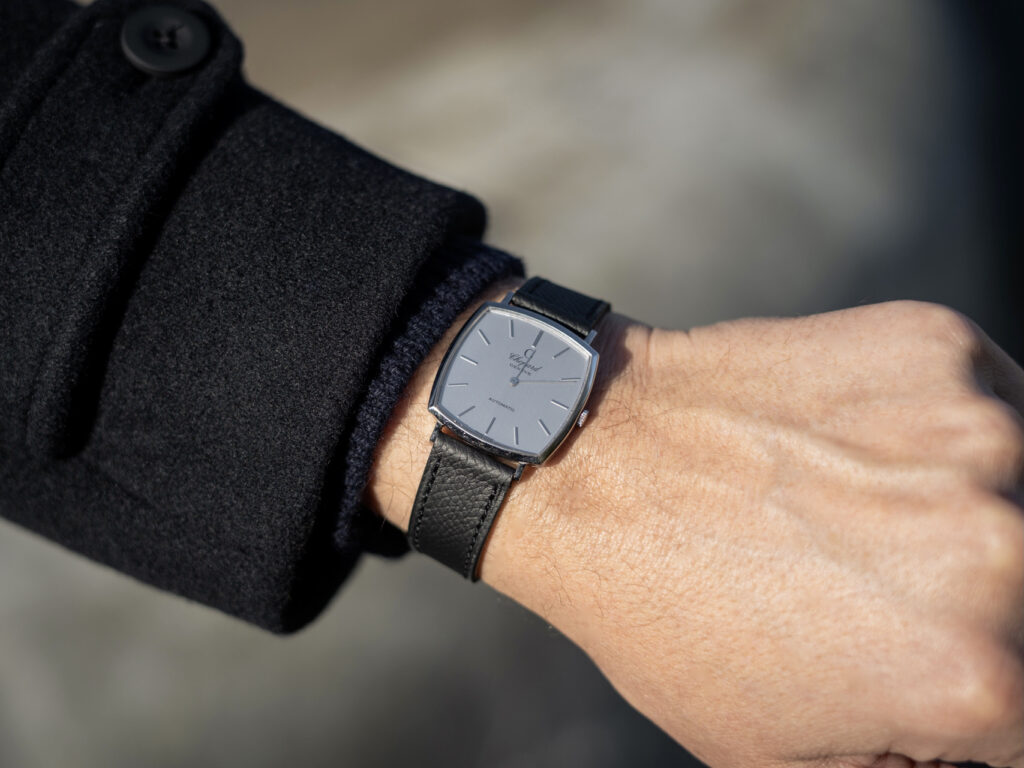 The next chapter in excellence

Chopard got a new impulse when the children of Karl Scheufele III and his wife Karin joined the firm in the early 1980s. While their daughter Caroline focused on the jewellery collections, son Karl-Friedrich would become a driving force in the watchmaking division. With a keen eye for quality, he went on an ambitious quest, and that is turning Chopard into a full-blown manufacture. While he would succeed in this in 1996, he didn’t achieve this all at once. To build towards this, he first went on a mission to increase the quality of Chopard’s watches by working with some of the best suppliers in the world.

The watch for sale here can best be described as a transitional piece, as it already shows what Chopard was well on its way to become, yet it is not yet powered by a manufacture movement. This makes it a rare creation. With its cushion-shaped case, made from 18 karat white gold, and matching dial, its appearance is rather understated. Yet when you look a bit longer, you notice some flamboyant details, such as the flaring of the case and how the sapphire crystal perfectly matches this. It gives the watch a certain elegance without taking away from its undeniable masculine style. It has all the hallmarks of the later Chopard watches, made in their own manufacture, including the movement. 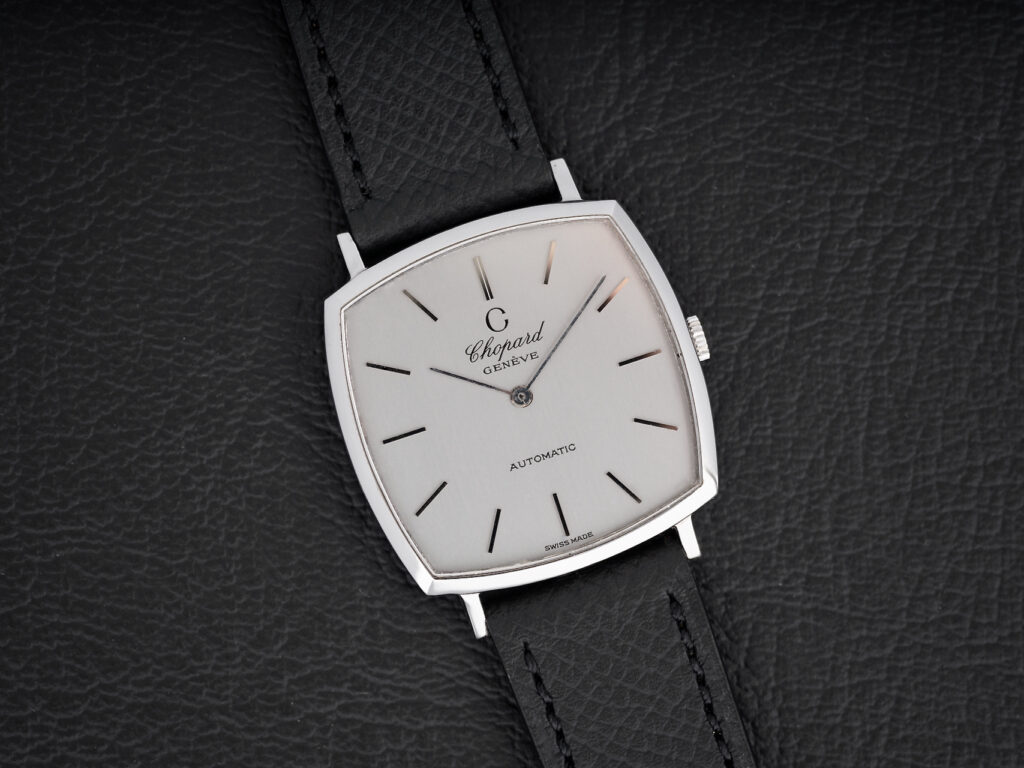 Wearing the inspiration for the future

Karl-Friedrich Scheufele is very quality-oriented, and that also becomes clear when looking at the movement he selected for this watch, the Universal Geneve, caliber 2-66. At the time, Universal Geneve was a brand that combined a rich history with a deep understanding of mechanics. They developed several notable movements that made their mark on the industry, with the caliber 2-66 being one of them. It was introduced in 1972 as the thinnest automatic movement available. It has a height of only 2.5mm, something Karl-Friedrich Scheufele most certainly seemed to like, as it enabled him to keep the profile of this watch very slim. Another signature feature of the movement is that a micro-rotor powers it. This type of movement are only built by a handful of manufactures. It offers not only a charming layout, but because the rotor is placed at the same level as the bridges and gear train instead of on top, the movement can be made slimmer.

This is also why this particular watch is so important in the history of Chopard, as its charming, understated look and the layout of the movement would become the inspiration for the first manufacture watches of the brand. In 1996, Chopard would launch their very first L.U.C, the abbreviation under which they mark their models with manufacture movements. They stand for the initials of the companies founder, Louis-Ulysse Chopard. Their first manufacture movement, caliber L.U.C 1.96, shows a lot of resemblance to this watch’s movement. Its transitional status is also confirmed by its crown, which is marked L.U.C, a further testimony of the exquisite character and rareness of this Chopard. 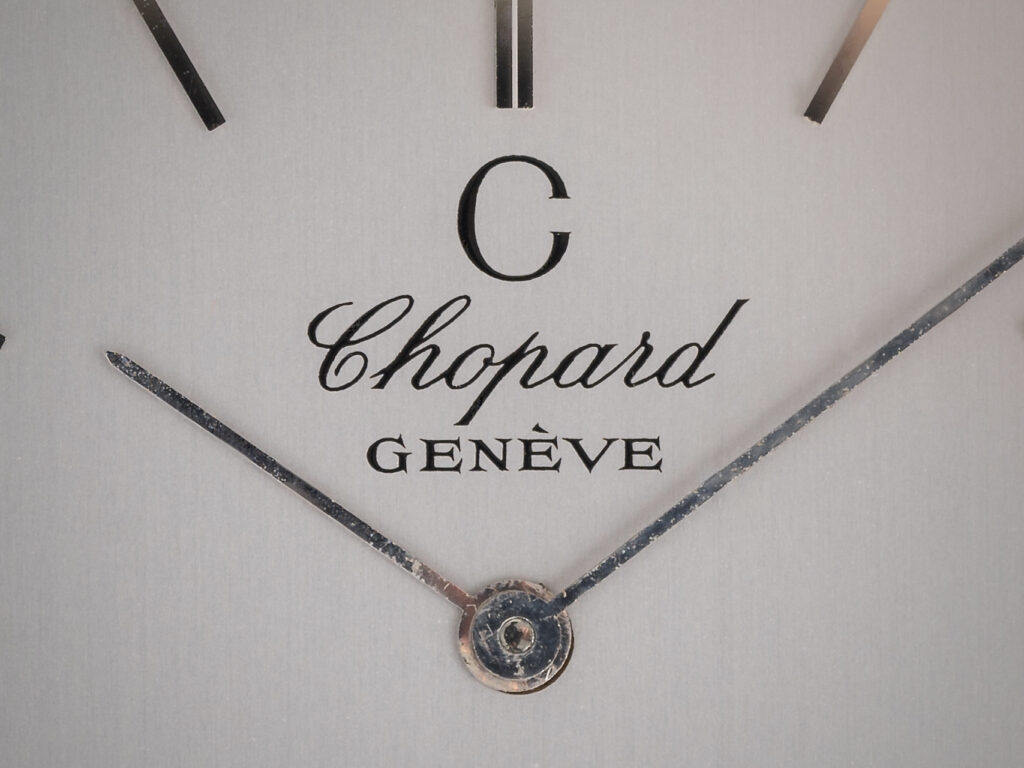