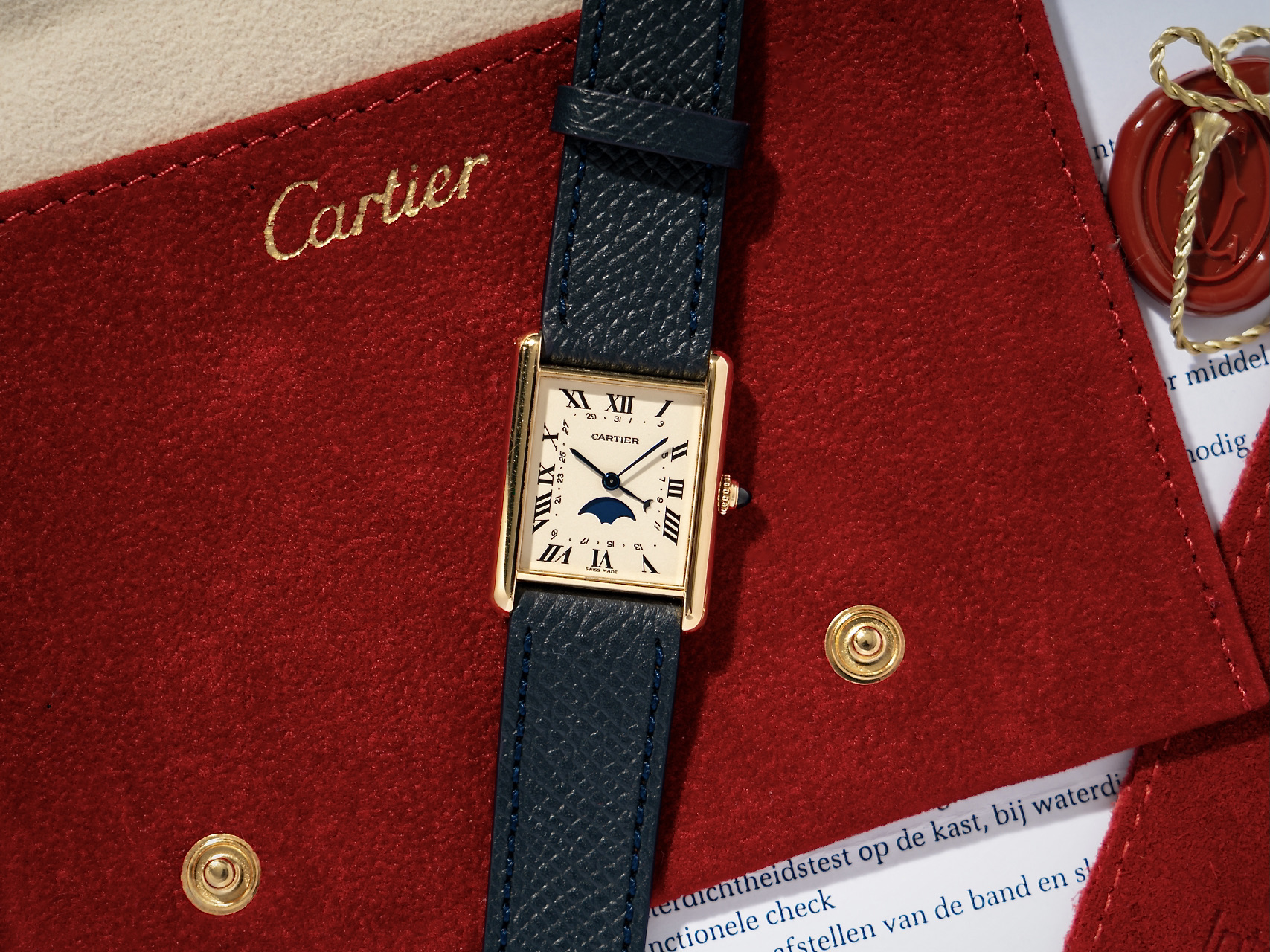 Tank Louis Cartier Phase de Lune: The Perfect Tank That Isn’t For Everybody

If there is one model Cartier has always been quite conservative with, it is the Tank Louis Cartier. It wasn’t until 2004 that La Maison debuted something offbeat with the Tank Louis Cartier Noctambule, the first skeleton version of the iconic watch, which also had a slightly enlarged case. That by itself was also the main theme of the Tank Louis Cartier XL, which debuted in 2006. Here the classic proportions of the watch were enlarged to meet current trends, with the added advantage that it offered more space for the gorgeous guilloche dial. Also part of the famed Collection Privée Cartier Paris, was the two-time zone model and the 2014 Tank Louis Cartier Sapphire Skeleton. This was pretty much how funky it could get, not counting the two-tone dials introduced this year. One watch that is often forgotten, and predates them all, is the Tank Louis Cartier Phase de Lune, offering rare complications (for a Cartier) in the classic size watch.

The look of love

The Tank Louis Cartier Phase de Lune looks already different when you first set eyes on it, not even because of the complications. First, there is the absence of guilloche on the dial. Its eggshell color has a slightly grained texture to it. This gives a matte effect that provides the watch with a sober touch. I wonder how this watch would look with a classic guilloche dial. That might actually be too much of a good thing, adding another texture to an already busy dial, despite the absence of the railroad track. Legibility is excellent, with the beautifully blued hands, of which the pointer date has a distinctly different design. The moon phase is kept very simple, with a polished gold moon, on a plain dark blue disc. No stars, no man in the moon, and quite fitting into the overall theme of the watch. 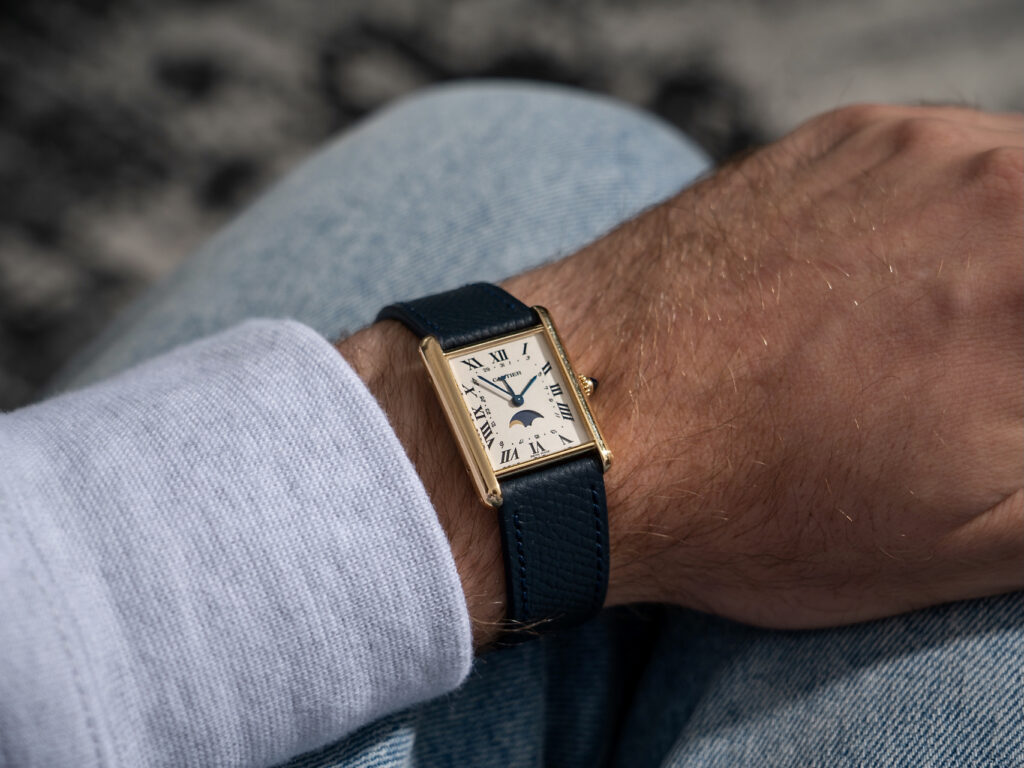 Although you probably don’t realize this at first, the other thing that stands out is that the case is slightly thicker than what we are used to of a classic Tank Louis Cartier. The reason for this is the movement, where added space is needed for the hand indicating the date, as well as the moon phase disc. The crown is placed rather low in the case, visually amplifying its thicker appearance as well as matching it thanks to the plumb sapphire cabochon inserted in it. Dare I say that this makes it look slightly more like a Tank Must, although this watch is, of course, made from 18k yellow gold.

A moon phase has always been one of the rarest complications on a Cartier. It was actually the Pasha that was the first model to utilize this complication on a larger scale, but as it was there only incorporated on precious, gold-cased models, total production has never been that voluminous. This changed slightly in recent years, as the moon phase is now also available in the Ballon Bleu and Drive collections. The centrally mounted pointer date is even more unique as I cannot think of any other model of Cartier that features this complication other than the Tank Americaine Phase de Lune, which is equipped with the same movement.

Of the two, I personally favor the Tank Louis Cartier Phase de Lune. Not only because I have a general fondness of the model, but more so because the Tank Americaine is much longer, and the pointer hand is waving at the date from a distance. It’s like standing on Place de la Concorde and pointing at the Eiffeltower, which is still a generous two kilometers away. In the Tank Louis Cartier, the complication is not as lost in space as with its American sibling. It becomes more of a unity, in my opinion. 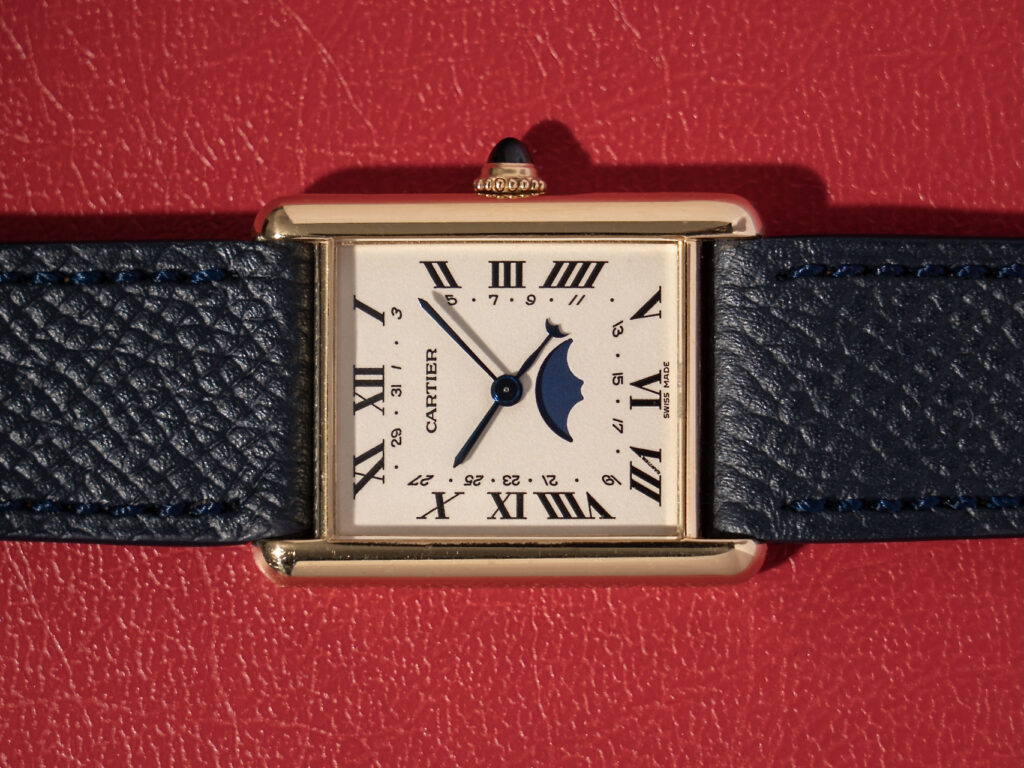 Some might be offended by the quartz caliber powering this Tank Louis Cartier Phase de Lune, but let’s put things in its (historical) perspective. Cartier has always been a brand that embraced quartz calibers early on. They are the opposite of a “form follows function”-brand, as Louis Cartier already challenged Edmond Jaeger in the early 1900s to make movements as thin and small as possible so that he enjoyed more artistic freedom. Quartz movements provided decades later Cartier’s designers those same liberties. From a commercial point of view, it also made sense. In the early 1990s, the time from which this watch dates, quartz was still highly appreciated. This is also not so surprising as Cartier’s clientele goes far beyond just watch connoisseurs. It consists for the vast majority of people who want a luxurious, timeless timepiece with style and class but do not necessarily have an interest beyond this or collect them.

An added advantage is also that you get the looks without the hassle. Maintenance is inexpensive and rather straightforward, making owning it a joy.  All the more, as there is no seconds hand to remind you that you are wearing quartz. The only reminder of this, next to never have to wind it, is the word engraved on the caseback.

This all combined makes this Tank Louis Cartier Phase de Lune the perfect watch that isn’t for everybody.

For more images and information on this rare and seldom seen Louis Cartier Tank, please click here – At the moment of publishing this watch is for sale.