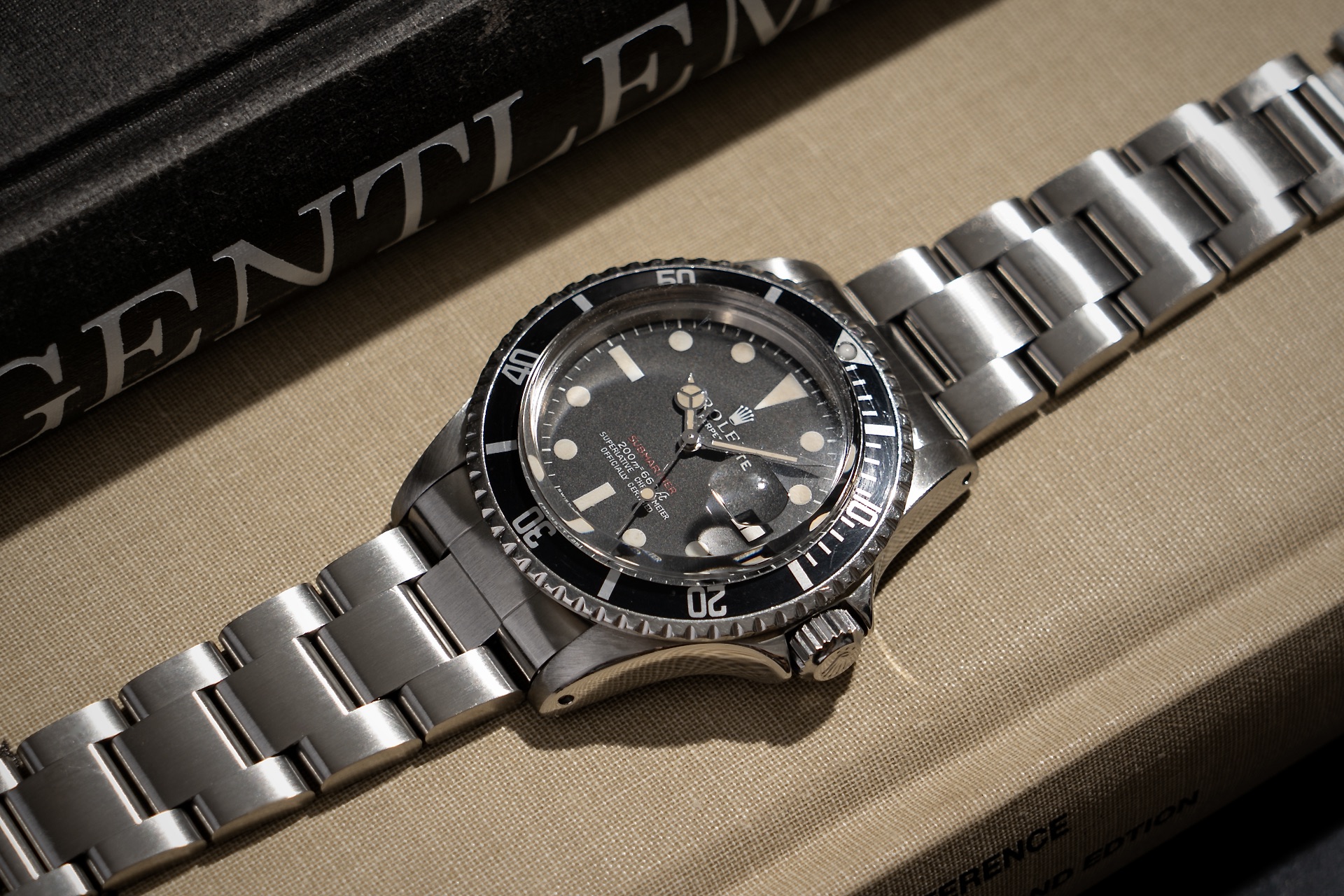 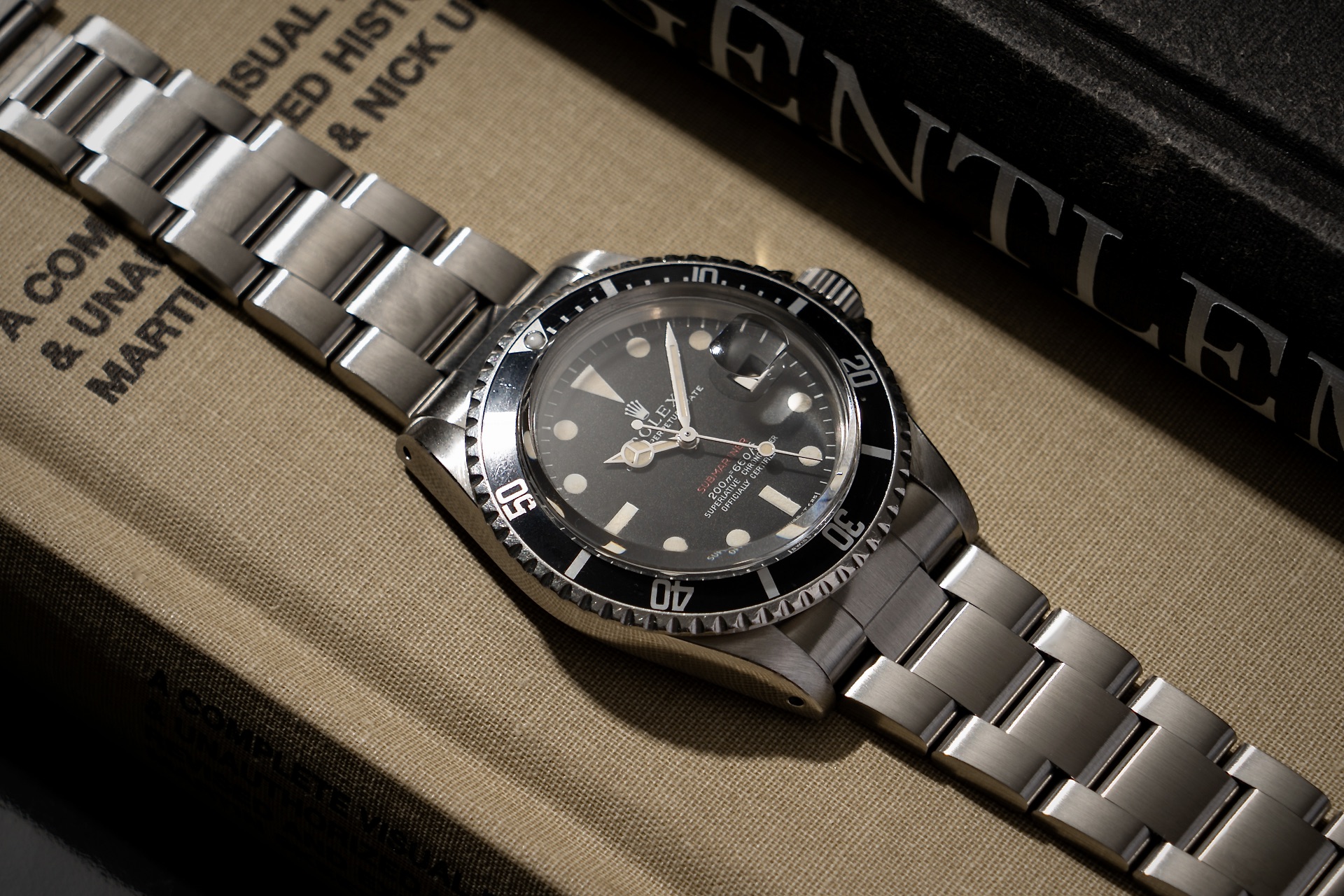 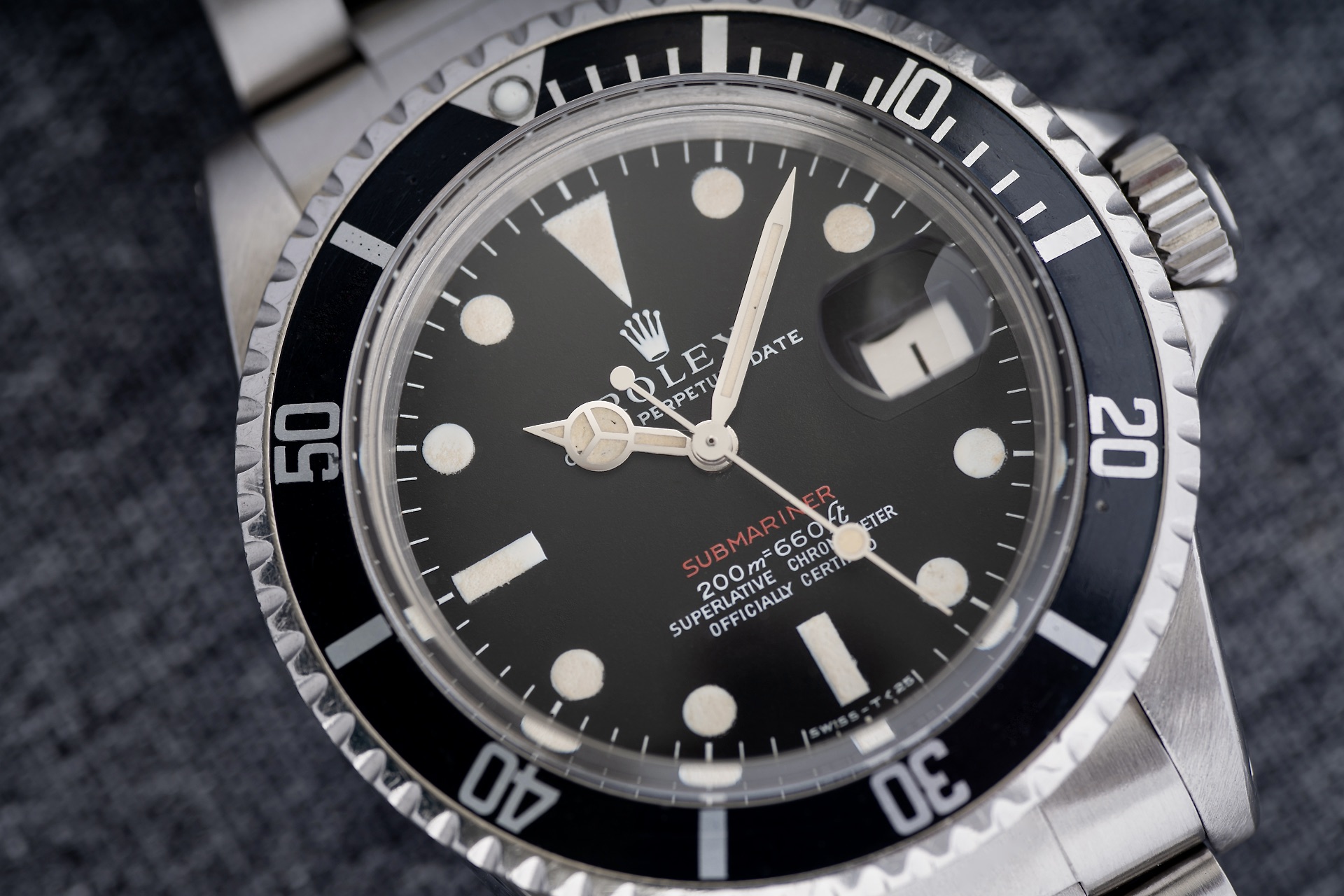 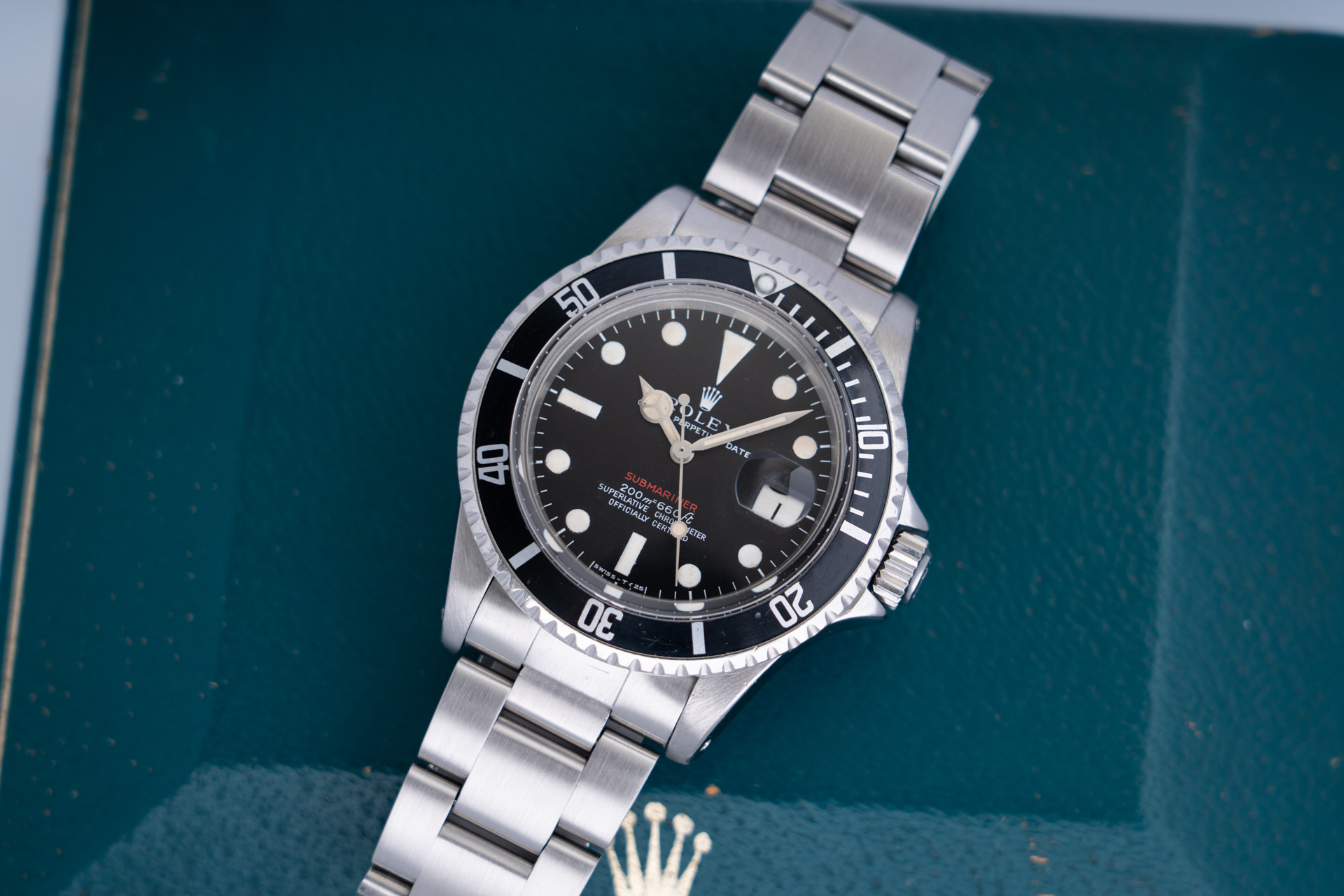 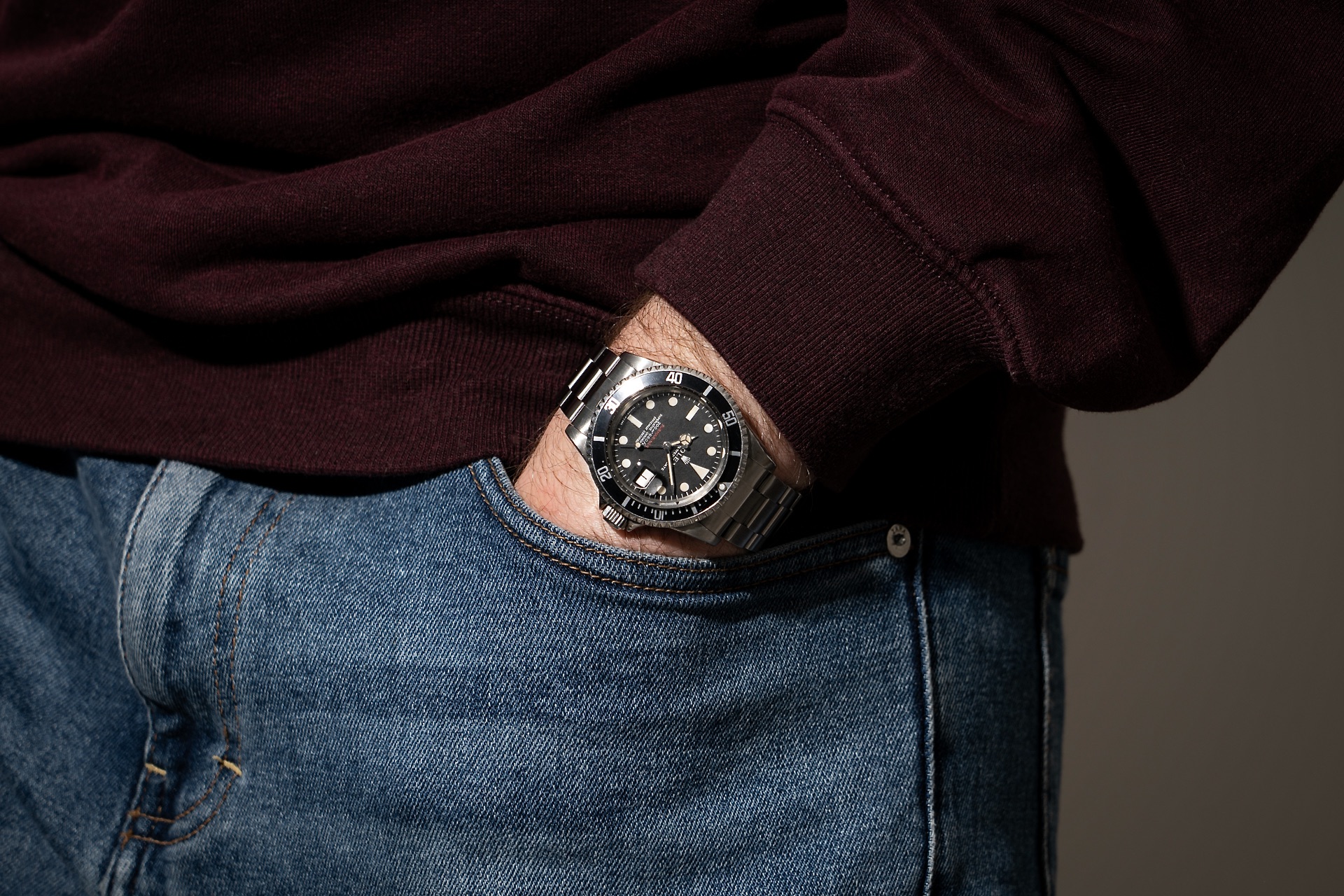 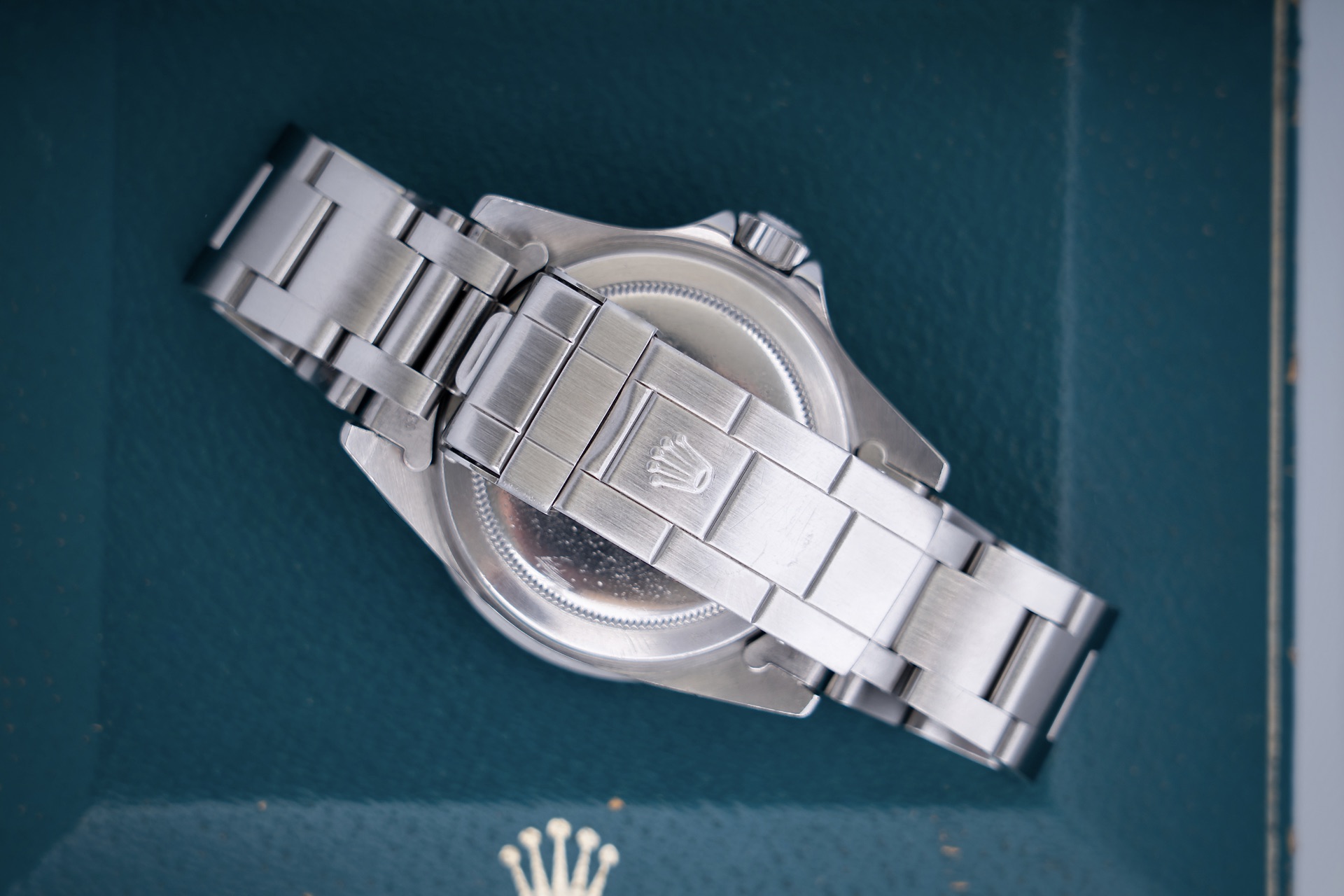 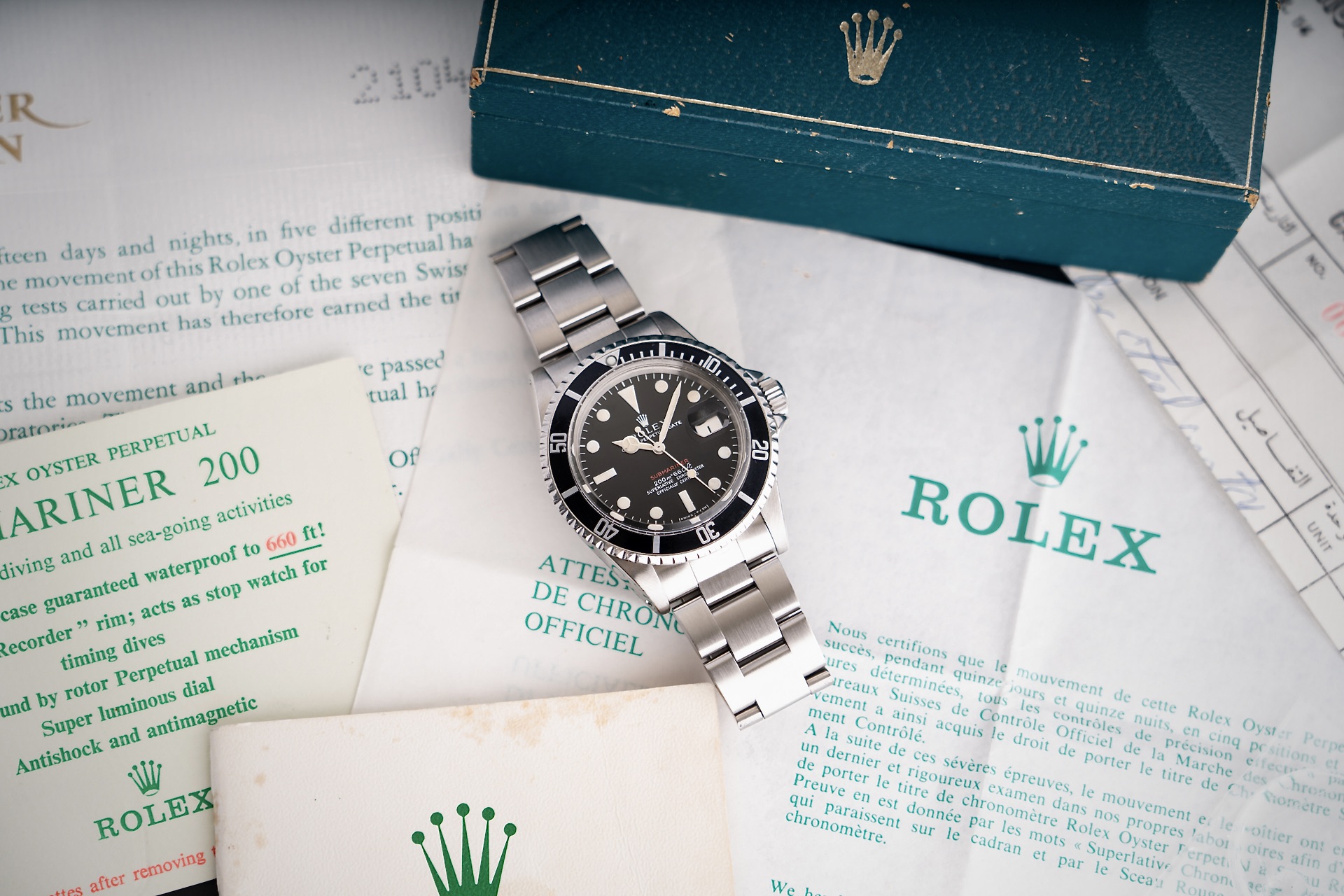 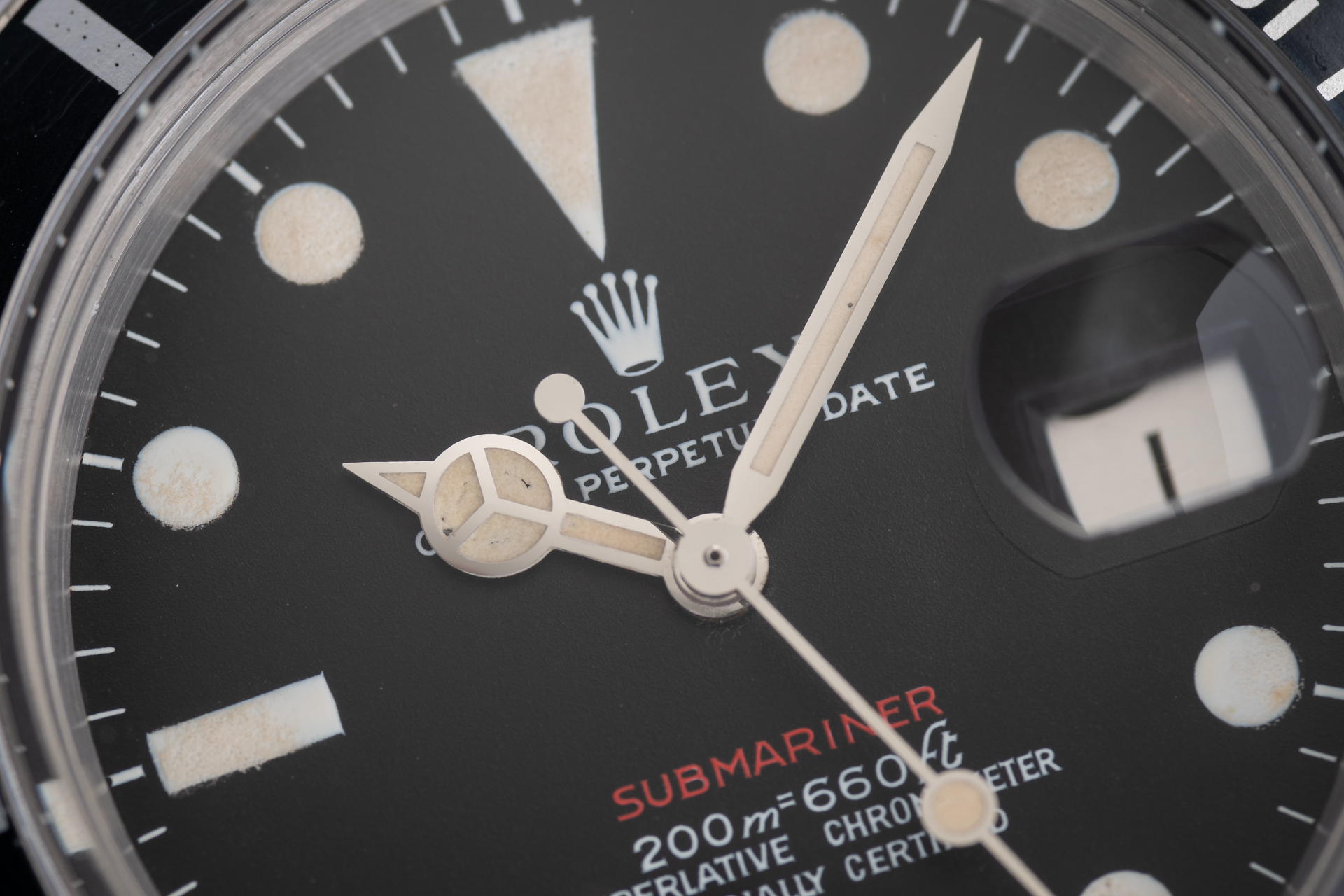 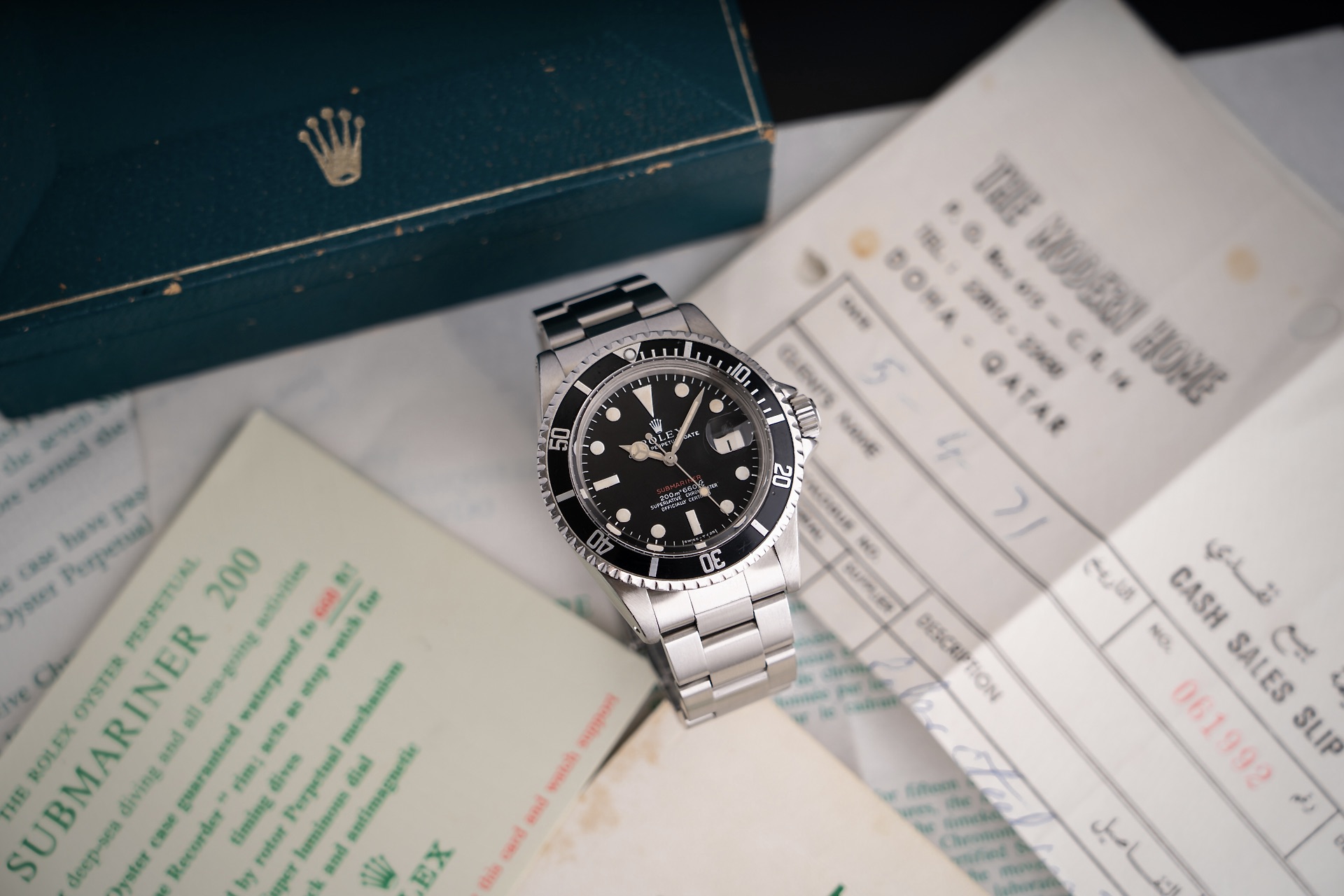 Manufactured in 1969 with a 2104XXX case number, this rare Meters First, 1680 MK1 Red Submariner has got a gorgeous dial with light yellow Tritium on the hour plots and a more creamy coloured Tritium inside the hands. Only extremely few (around 1.5 %) of all Red Submariners are a MK1 dial execution, thus making this vintage Rolex an outstanding collectors piece and of course a beautiful Submariner to wear. Assuming that about 25% of these early Red Subs are no longer collectible due to missing or wrong dials, or simply due to destruction of the watch (accidents, loss at sea, heavy water damage etc.) should indicate that we are dealing with a rare vintage Rolex sports watch.

We managed to purchase this watch from the very first owner, an elderly gentleman now in his mid seventies (but with a very keen mind) who joined the Shell oil company in Qatar right after he left the Dutch military in the late 1960’s. Amongst the company Shell, he also worked for BP and later on in his career for Aramco, to retire with a serious oil career under his belt. This gentleman is also a great story teller. He recalled walking into the Doha, Qatar Rolex AD; The Modern Home, back in April of 1971 and was asked to wait outside as members of the Royal family were doing some private shopping. Another nice anecdote is when he returned from the Rolex AD with his Submariner on the wrist heading back to the drilling site where he encountered some divers that worked on one of the Oil Rigs offshore, they couldn’t figure out why in god’s name he bought this dive watch “you’re not even a diver” or “what could you possibly be doing with this watch” Funny, and only the more affirmation that these early Submariners were true Toolwatches back in the day, truly manufactured with the diving profession in mind. Well what did he used the watch for, I hear you thinking. He used this Submariner to time the number of strokes per minute from each oil pump, but also on pressure and oil gages on drilling rigs, both on and offshore, he found the rotatable bezel extremely helpful in going about his daily tasks and continued to do so until that work got digitalized – His watch however remained analog throughout his entire career.

As most of you will know, the dial is the most valuable component on most vintage Rolex models, and that’s no different here. The dial remains free from damages and/or traces of water, this matte black MK1 Meters First dial has got Red Lettering of the word Submariner, the red is printed over white ink (look closely and you will see) making the colour a bit more vibrant. The so-called closed 6’s on the 660ft depth indication, are elongated with a curved F plus a distinctive and condensed font which is typical for these MK1 dials and therefor instantly recognizable as such. The black insert which was on the watch when we bought is a MK3 fat font and is a period correct insert. As far as the owner could recall, this insert has always been part of his Red Sub, he did however asked the RSC to replace the Tritium pip about 10 years ago as the watch was sent there for a movement overhaul, the Tritium pip, or ‘pearl’ was lost at some point in time and is now a RSC replaced, Luminova pip. The bracelet was also replaced from a 9315 to a 93150 solid Oyster. Having said that, we still have parts of the original 9315 bracelet present with the watch – literally worn to bits after about 40 years of daily use.

The original case still remains in a very nice and fat condition, the Red Sub dial is beautiful and of course all the paperwork, such as the original receipt, the Chronometer certificate, the original warranty booklet, cigarette card, coffin box etc. are al still present with the watch and very well cared for throughout the half a century it was in possession of the original owner. We feel honored to now offer up this watch as we’re looking for a new owner to take care of her for the next 50 years. As always the movement was fully serviced, but we kept the polishing to a minimum – This exquisite 1680 MK1 RED Submariner will be sold with our 24 month warranty.

*The buyer of this watch will get to enjoy a day on the Zandvoort Formule 1 track with the WatchWorks sponsored, Mode 11 Racing Team. As the driver puts the pedal to the metal, you will fly across the Formula 1 track heading towards the Tarzan corner at 200km h – your stomach against your spine and your new watch on the wrist to time it all 🙂