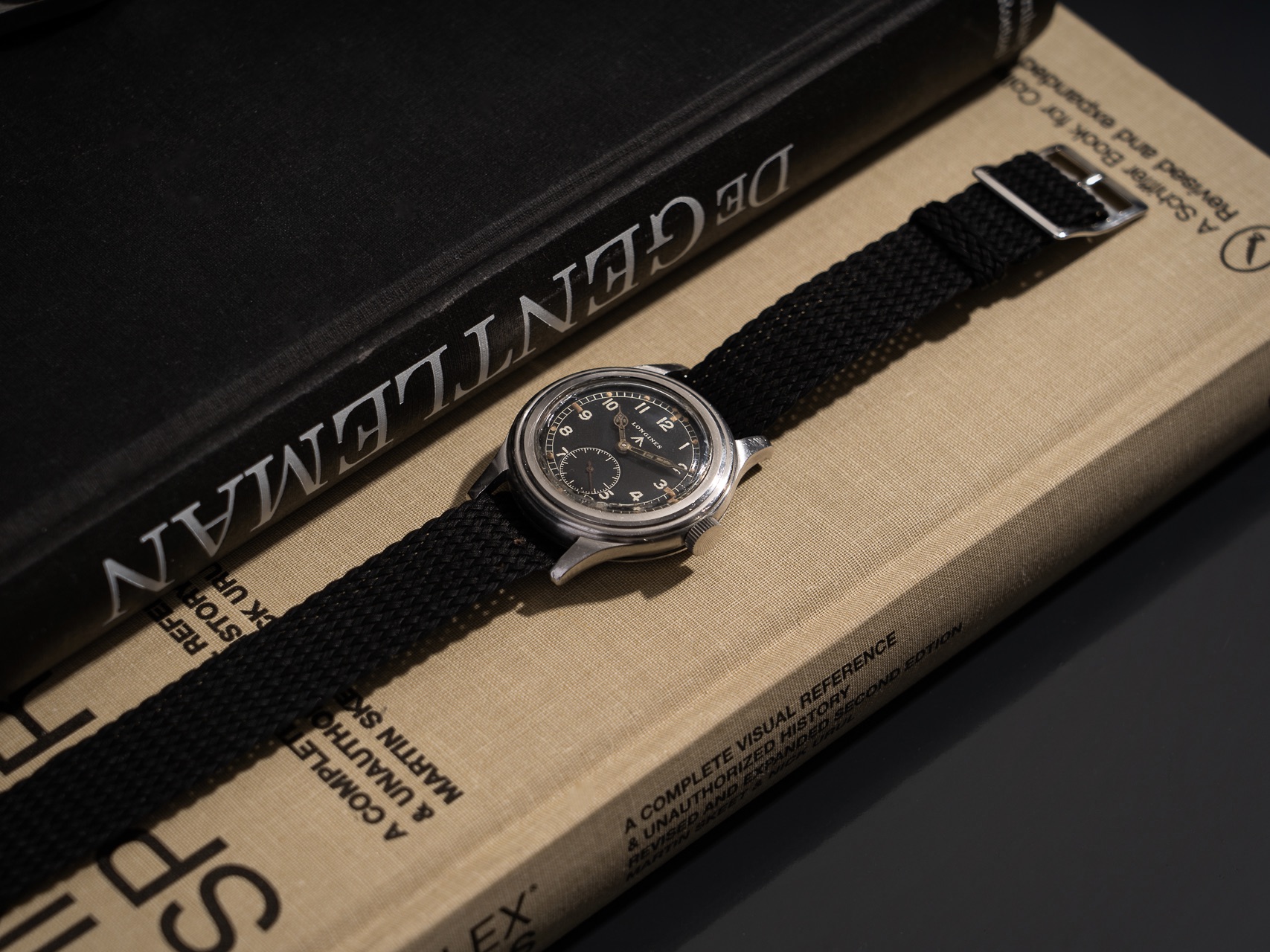 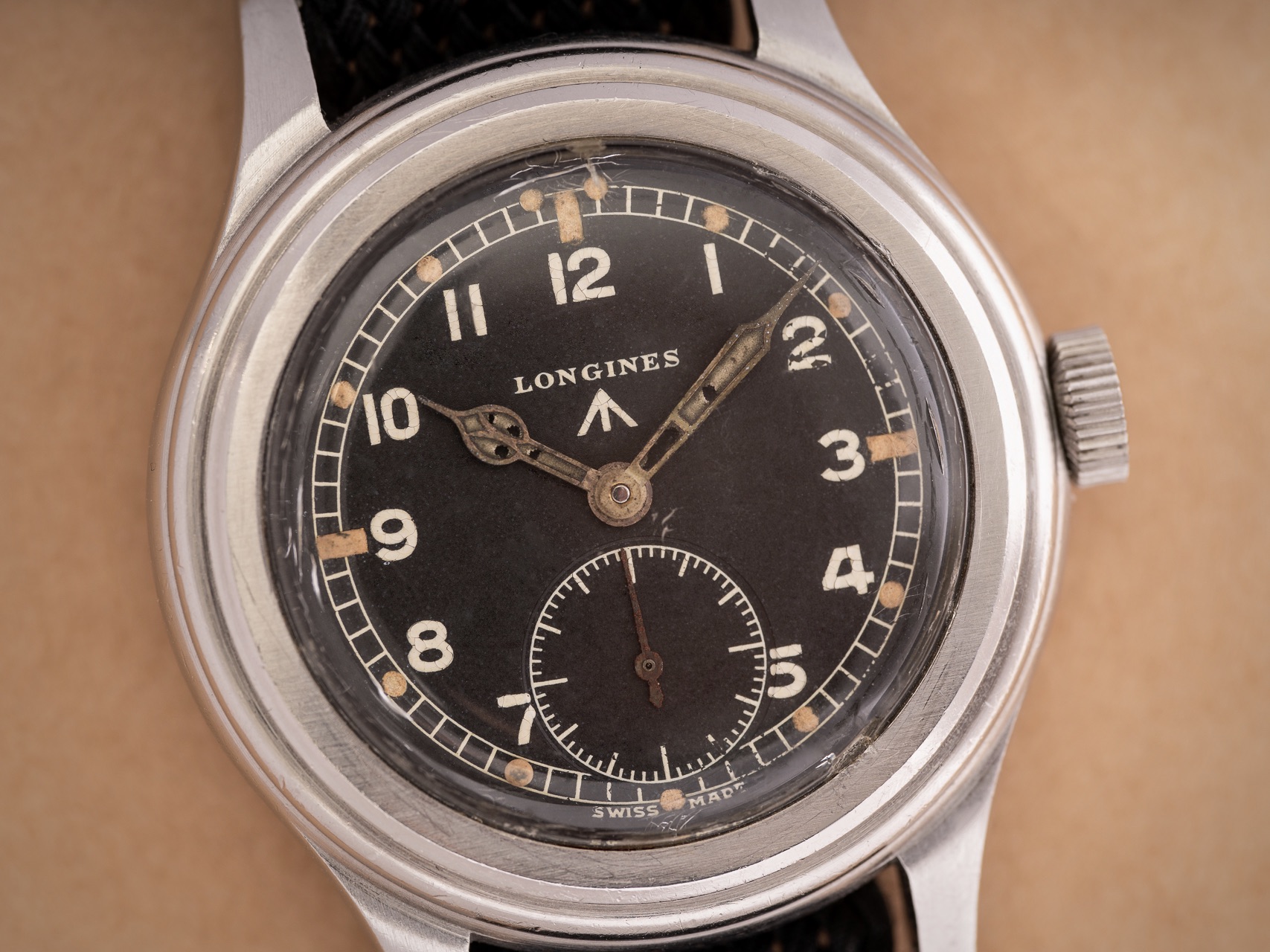 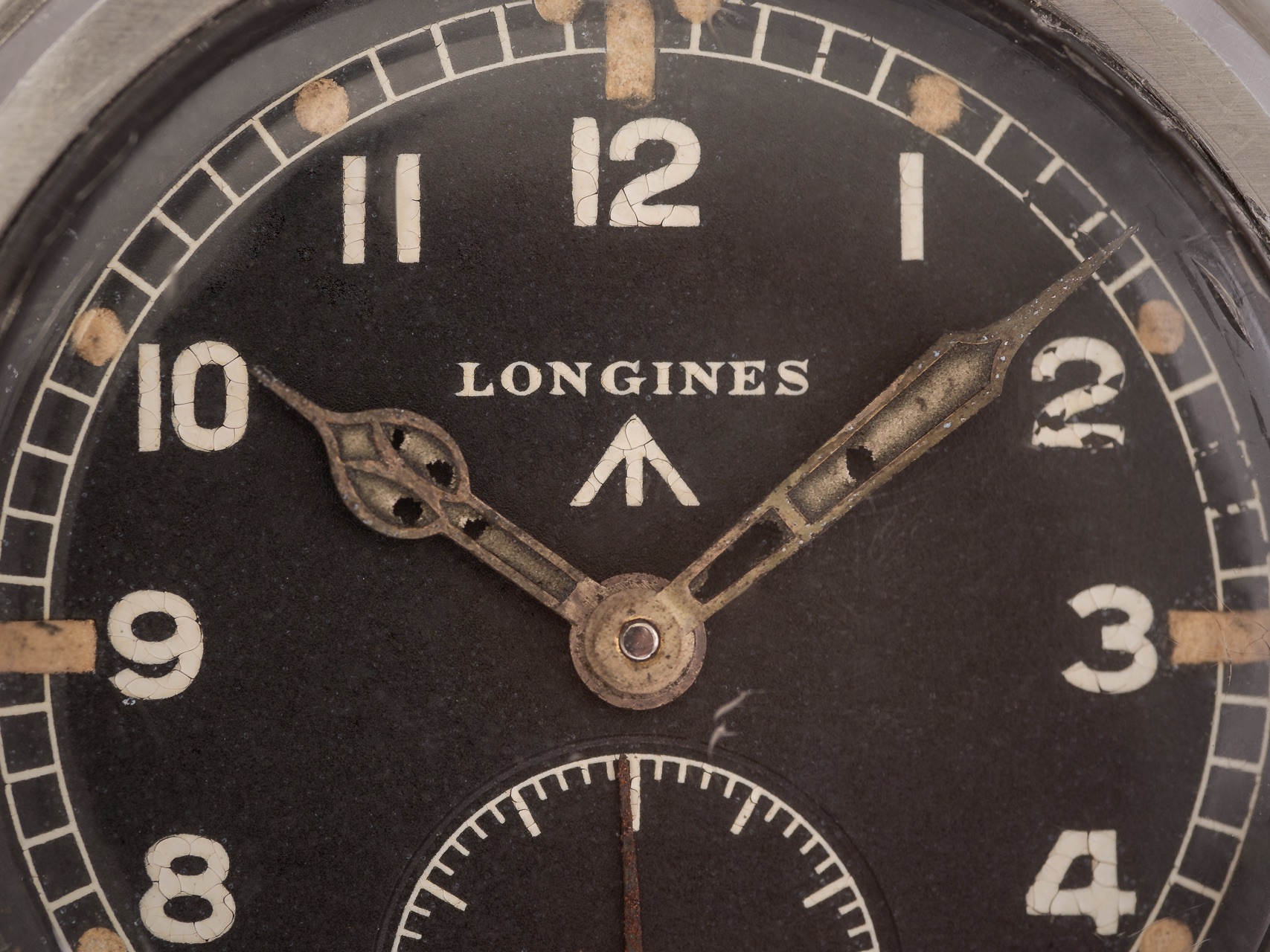 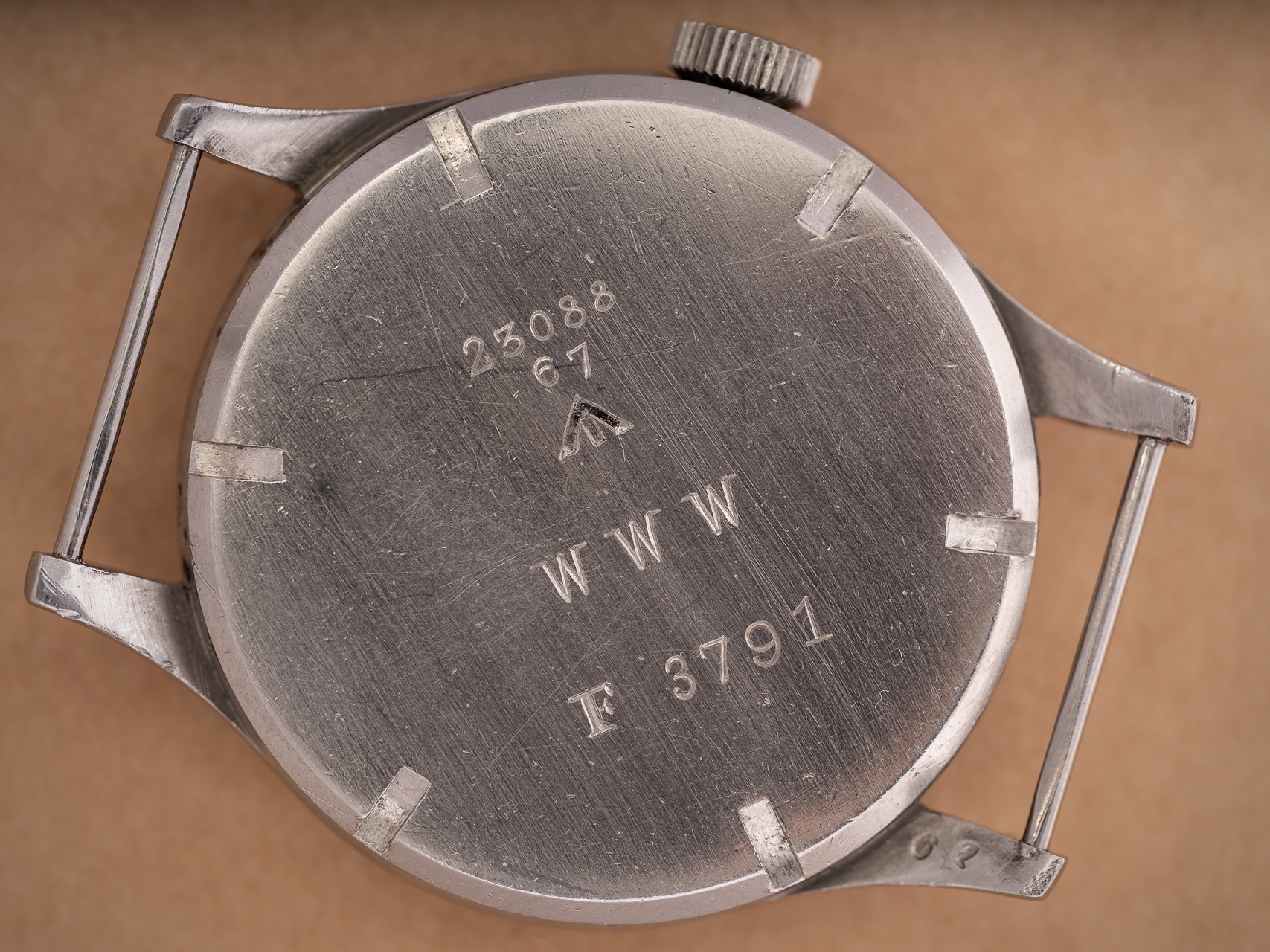 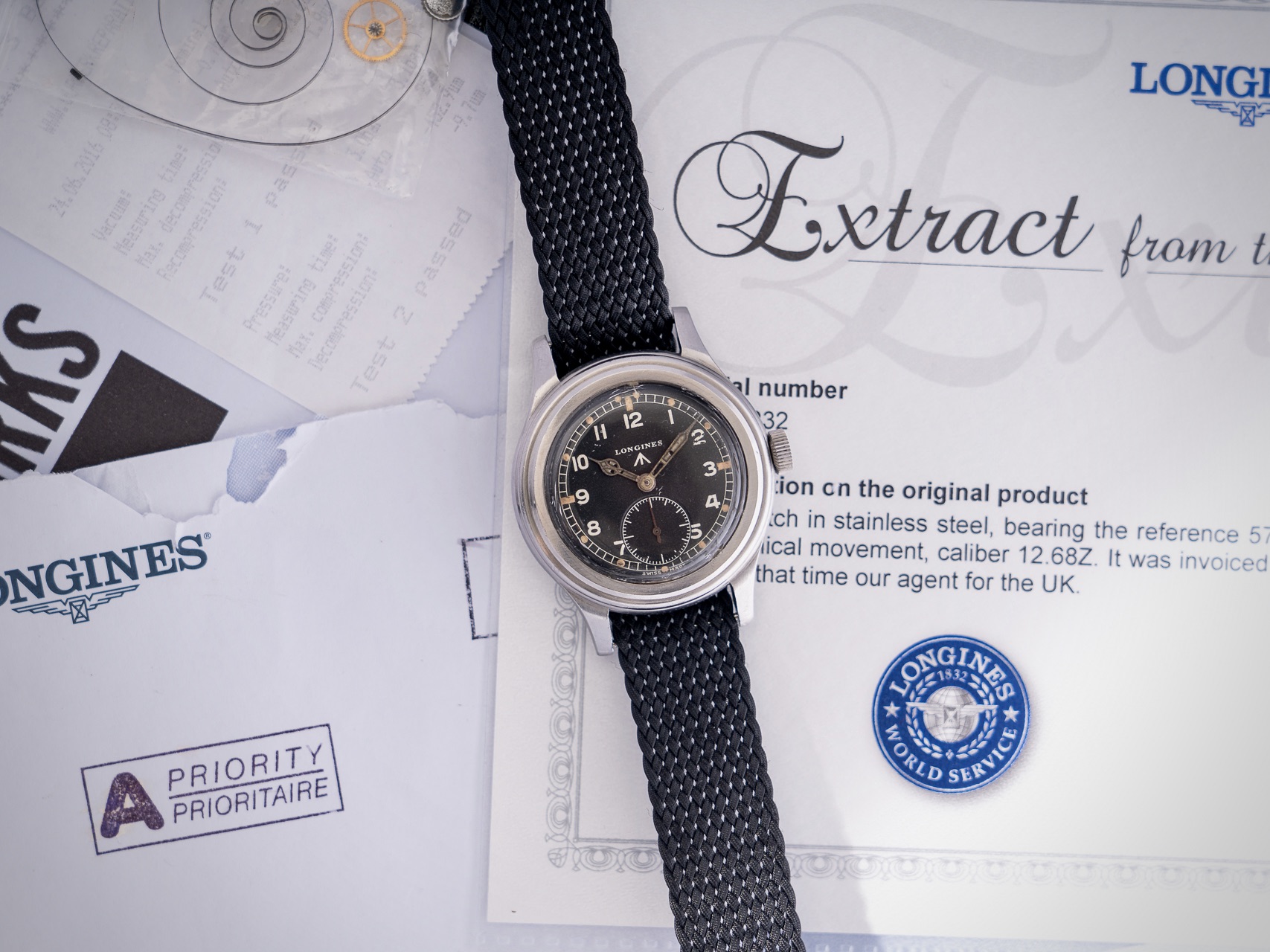 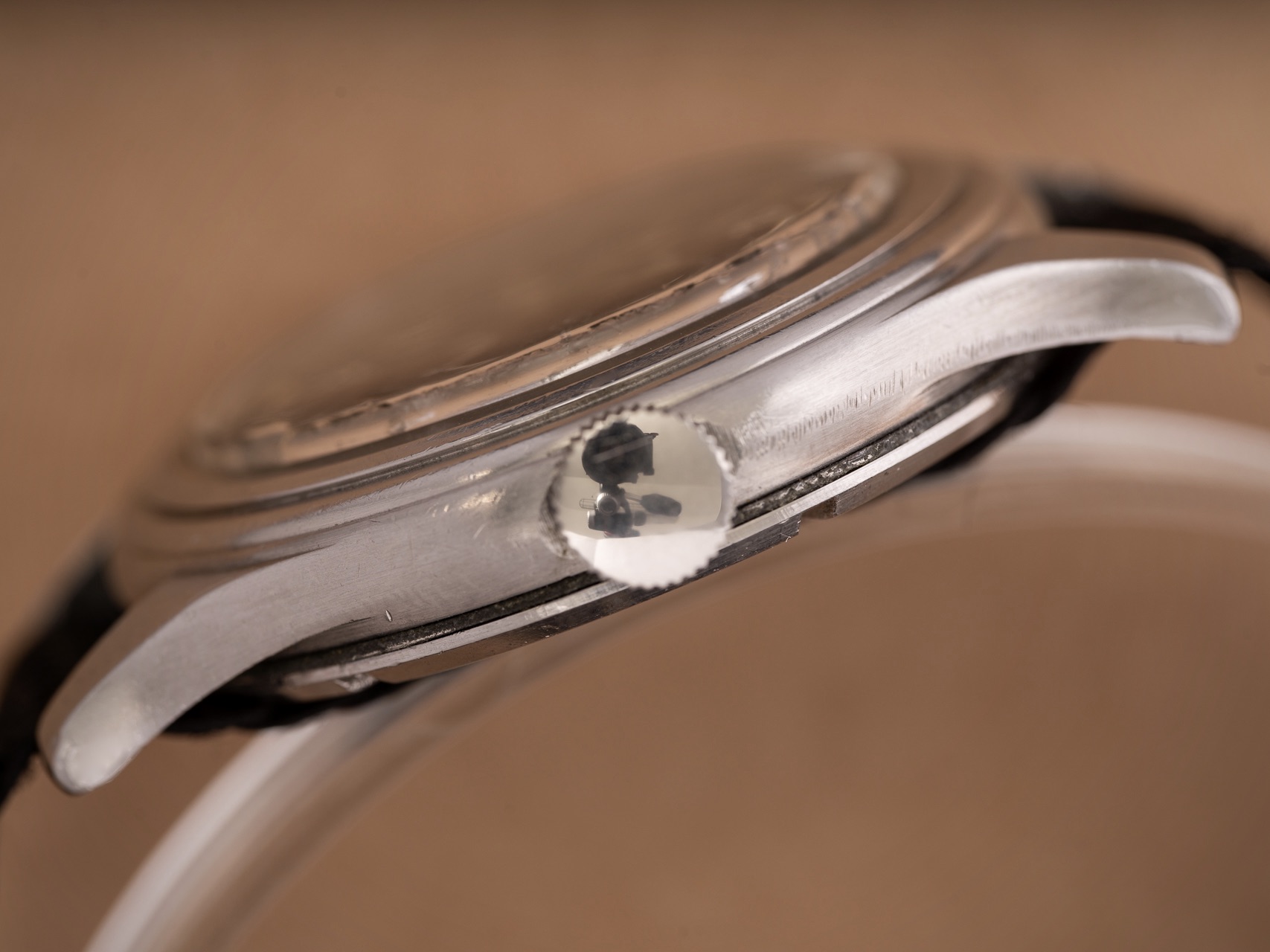 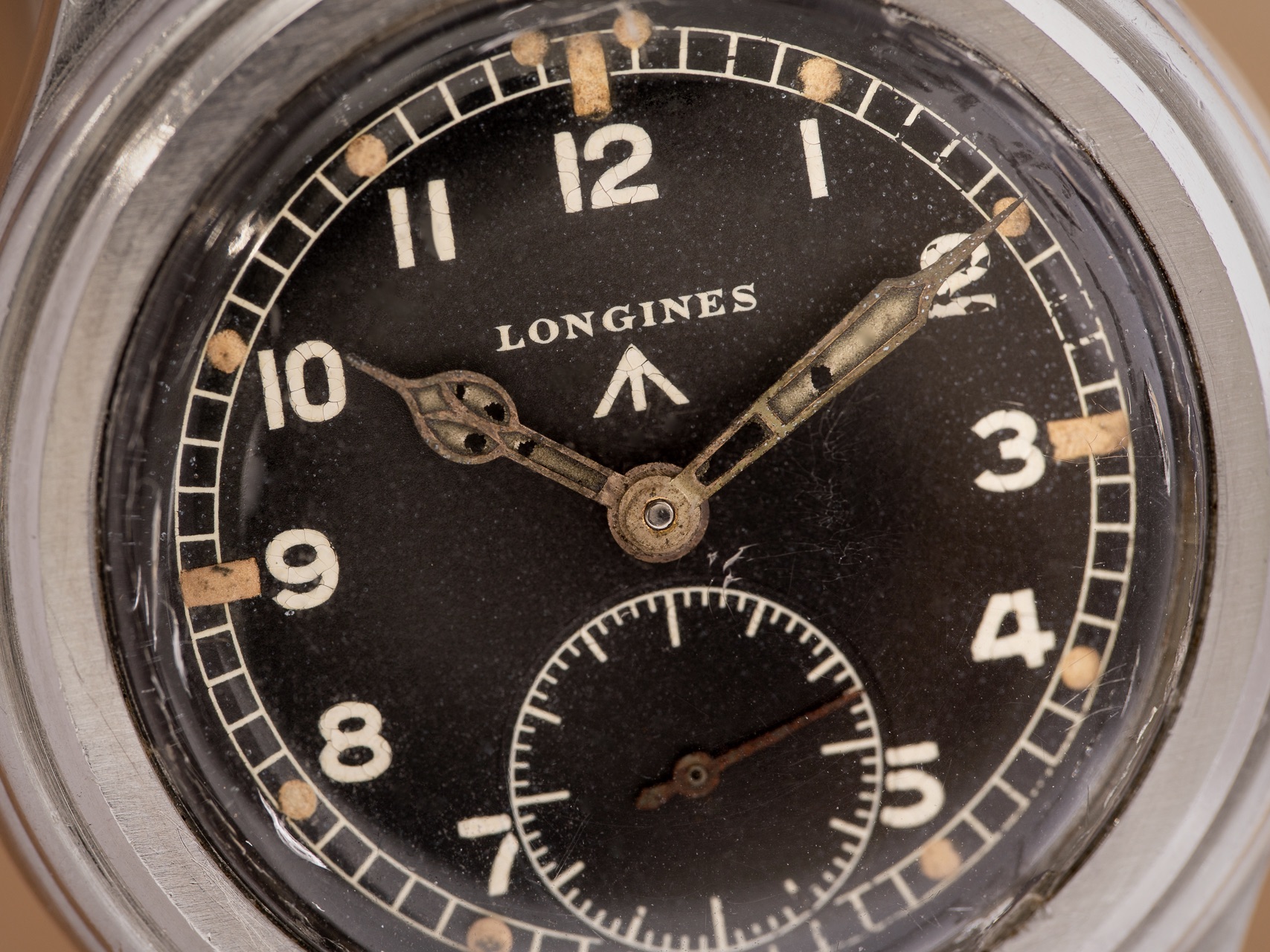 This British military issued, Longines with reference 5707 is a watch that is also known as reference 23088 aka ‘The Greenlander’ But the watch is best known amongst (military) watch collectors as being part of the so-called Dirty Dozen collection. This is a most sought after collection of twelve types of military watches made by twelve different brands. Between these twelve brands, about 145.000 watches were produced in roughly seven months time, Longines was amongst those with the lowest production of watches. It is estimated that about 8000 watches left the Longines factory in Saint-Imier during 1944 and 1945. The Longines we’re offering here bears manufacturing number 67 so it’s a very early production of one of the best military watches ever made and which are becoming ever more rare and difficult to obtain.

So, the watch your looking at is a military Longines wristwatch made of stainless steel, bearing the reference 5707. The watch is fitted with a beautiful Longines manually wound mechanical movement (Longines, caliber 12.68Z) which by the way was the only movement out of all the other Dirty Dozen manufactured watches that was fitted with a shock protection! Making this Longines already a very high quality watch back in 1945. The 38mm case also makes it one of the biggest watches out of the Dirty Dozen collection, the size also makes the watch very wearable to todays standards. The dial, including both of the central hands are the original radium ones from 1945, the same applies to the small seconds hand at the six o’clock position. The step-case is in original condition and has not been polished or brushed and of course still features the solid/fixed bars, just like on all proper WWW military watches. We did overhaul the entire movement but DID NOT touched the case, dial and/or hands. We even left the original crystal the way we found it, with cracks dents and battle scars! The case-back also still holds the original lead sealing to keep out the water under the most extreme conditions.

Despite all stories and nicknames we prefer to call this watch for what it is, a true military Tool-watch made by strict MOD (Ministry of Defence) specifications. This watch, as you probably can imagine, has a ton of history attached to it and is one of the best straight forward wrist-watches ever made!

The movement has been fully serviced and she runs incredibly smooth and within todays COSC specifications! This horological veteran is accompanied by its Extract from the Longines archives including our WatchWorks service rapport and parts replaced during the movement service.