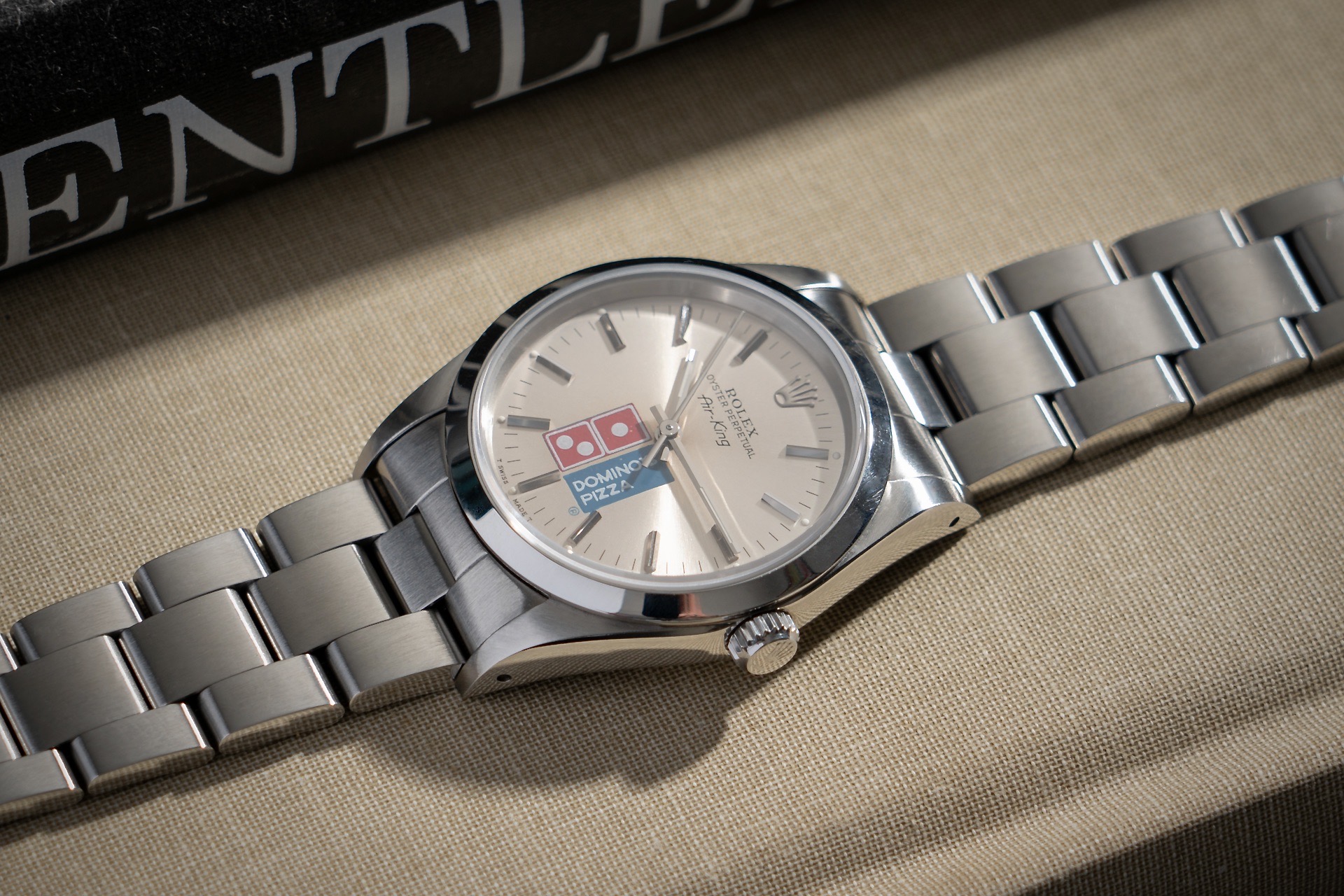 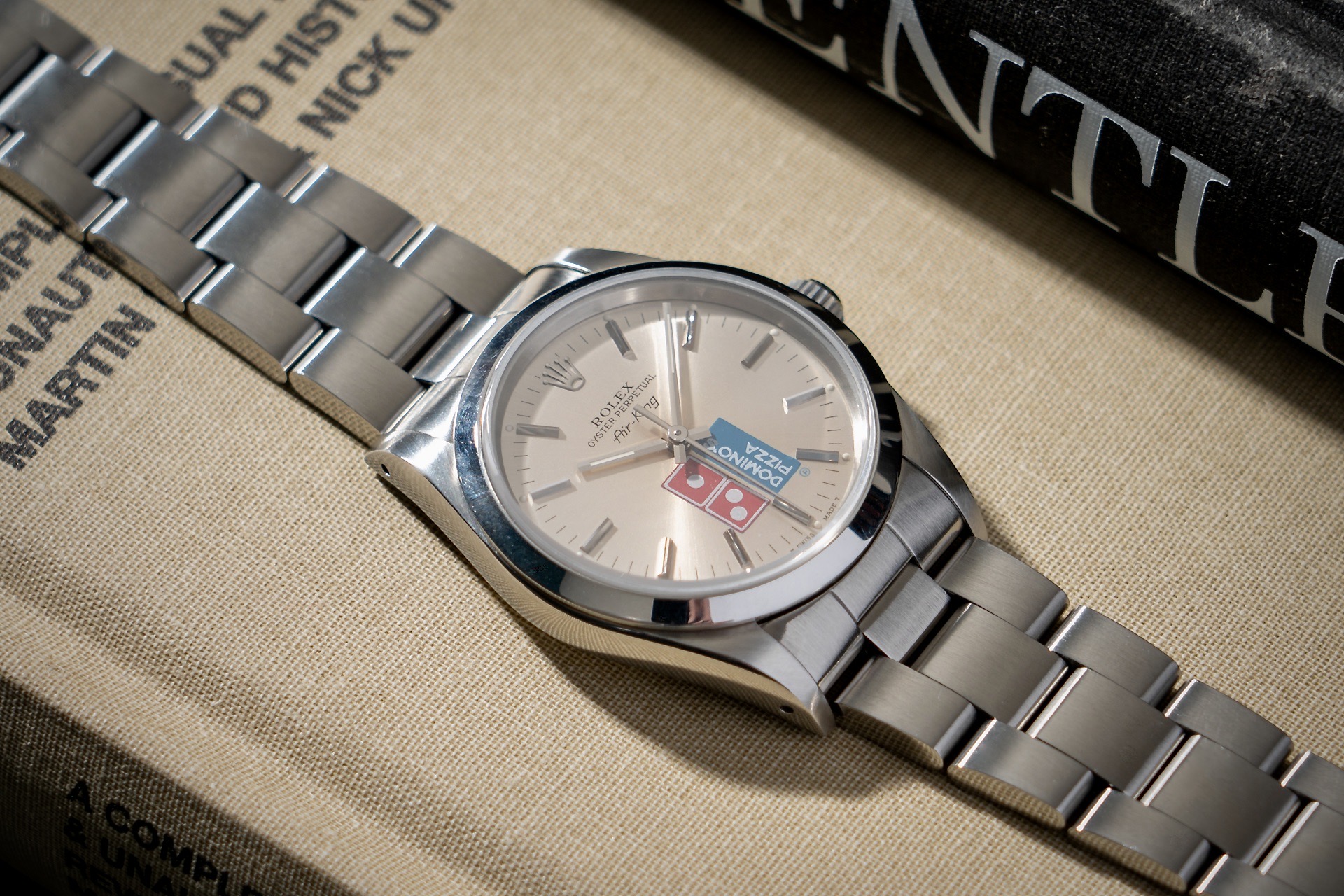 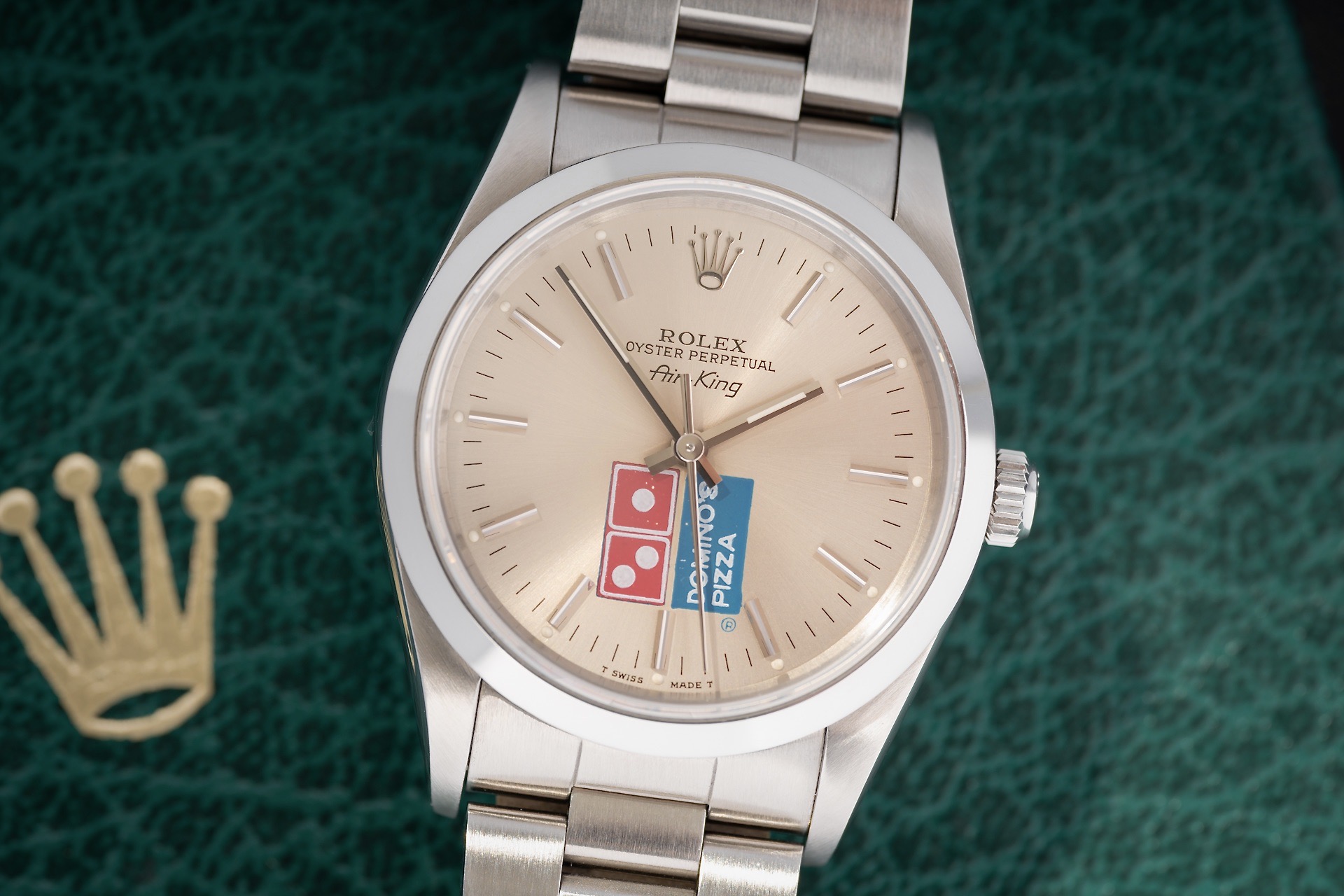 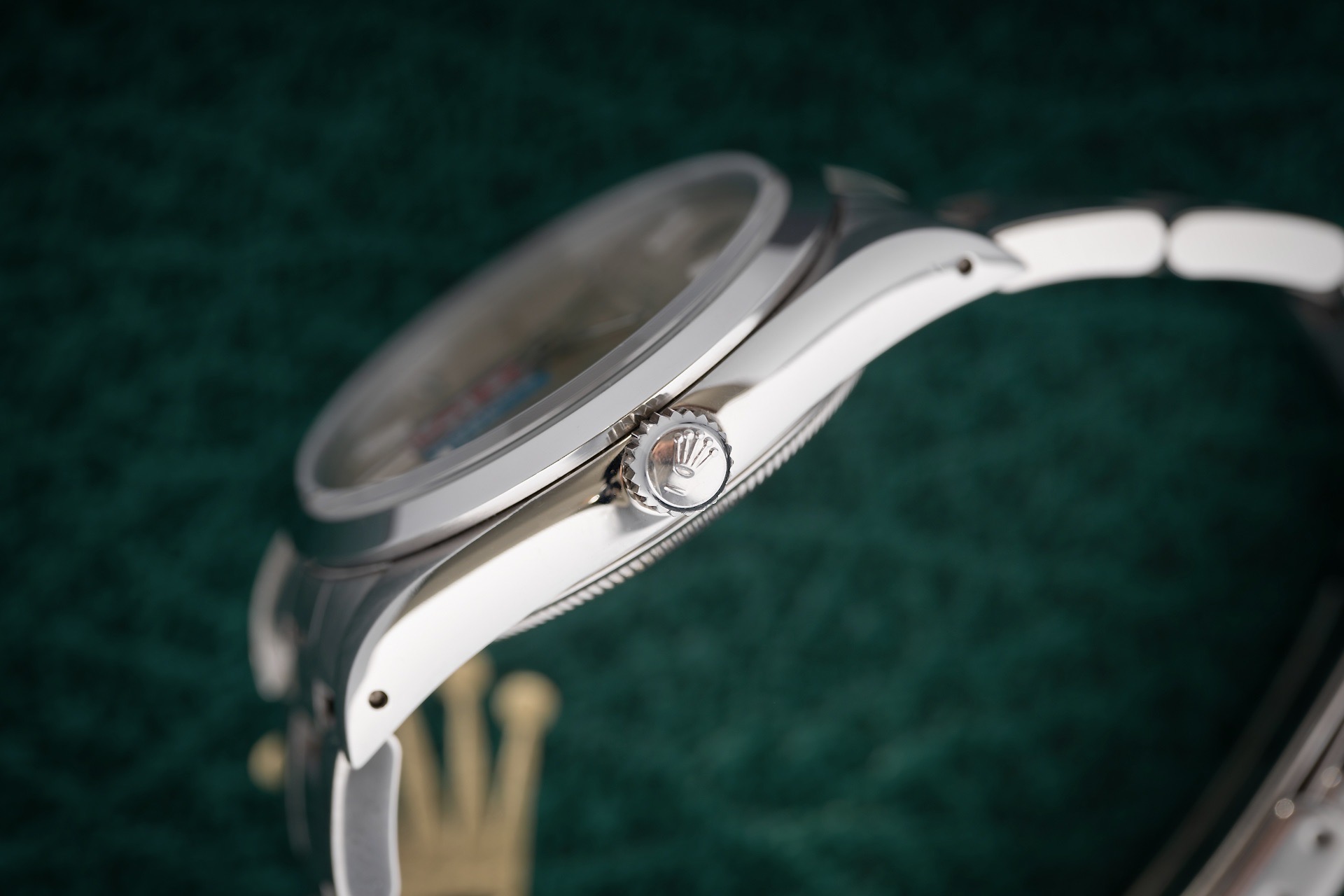 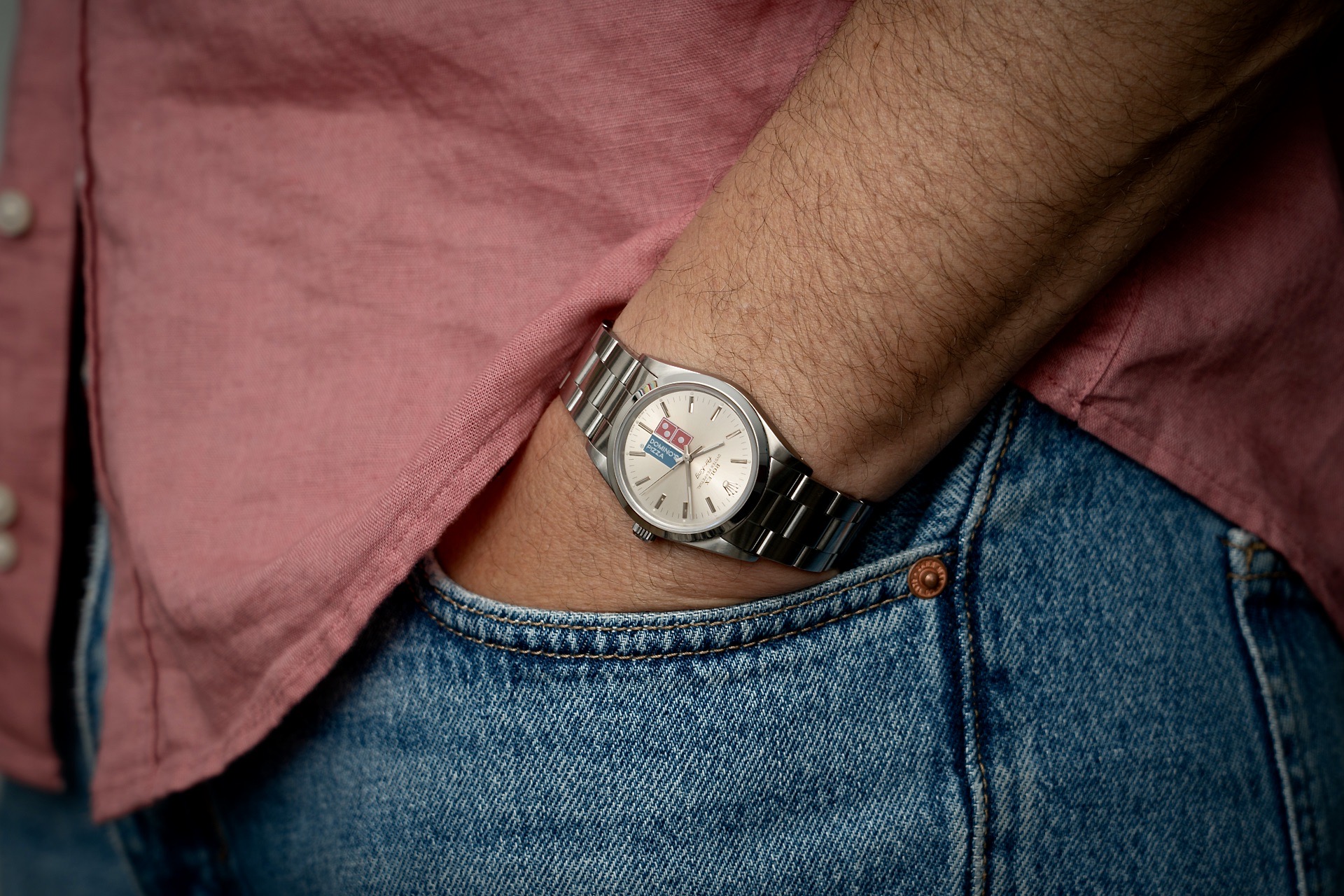 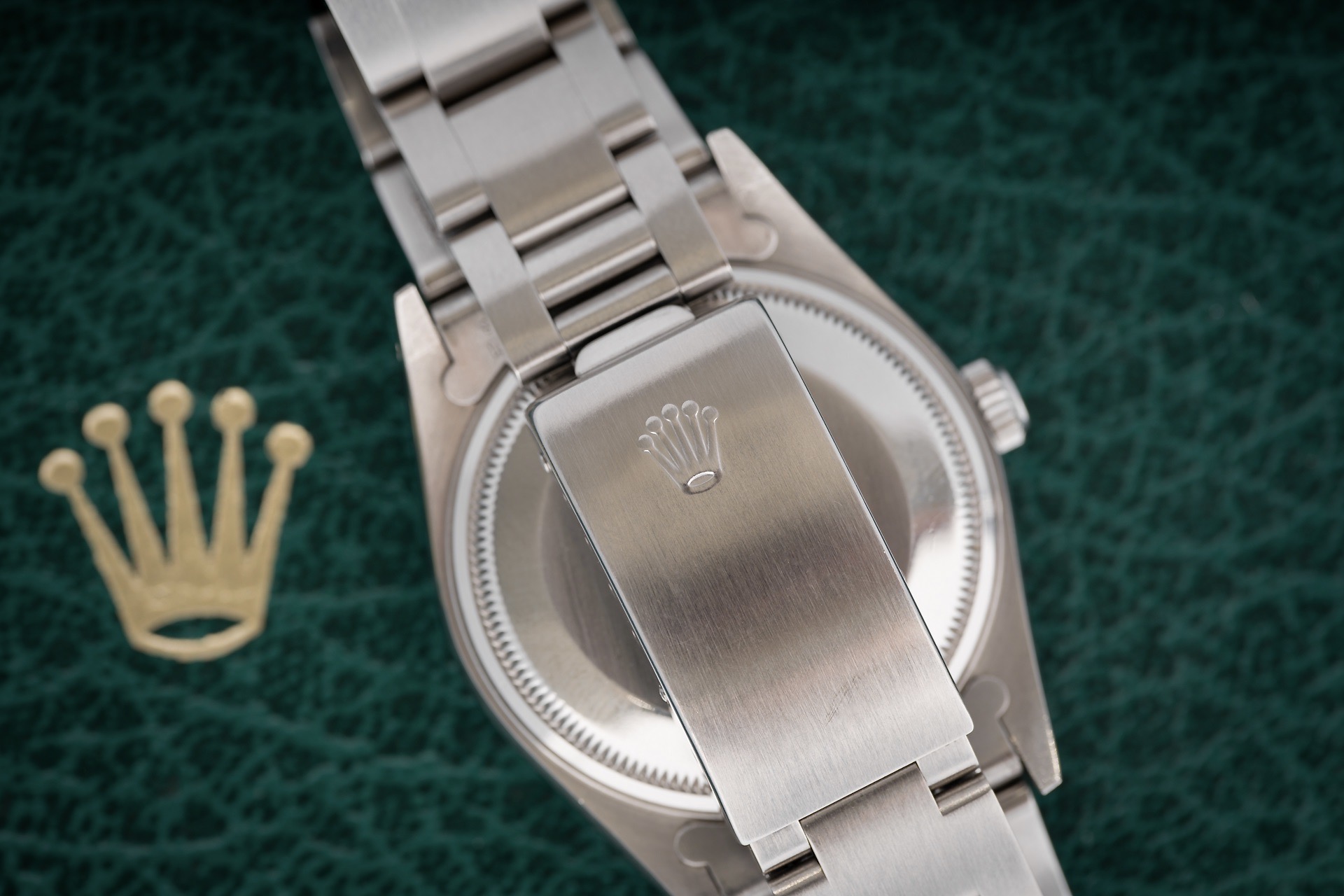 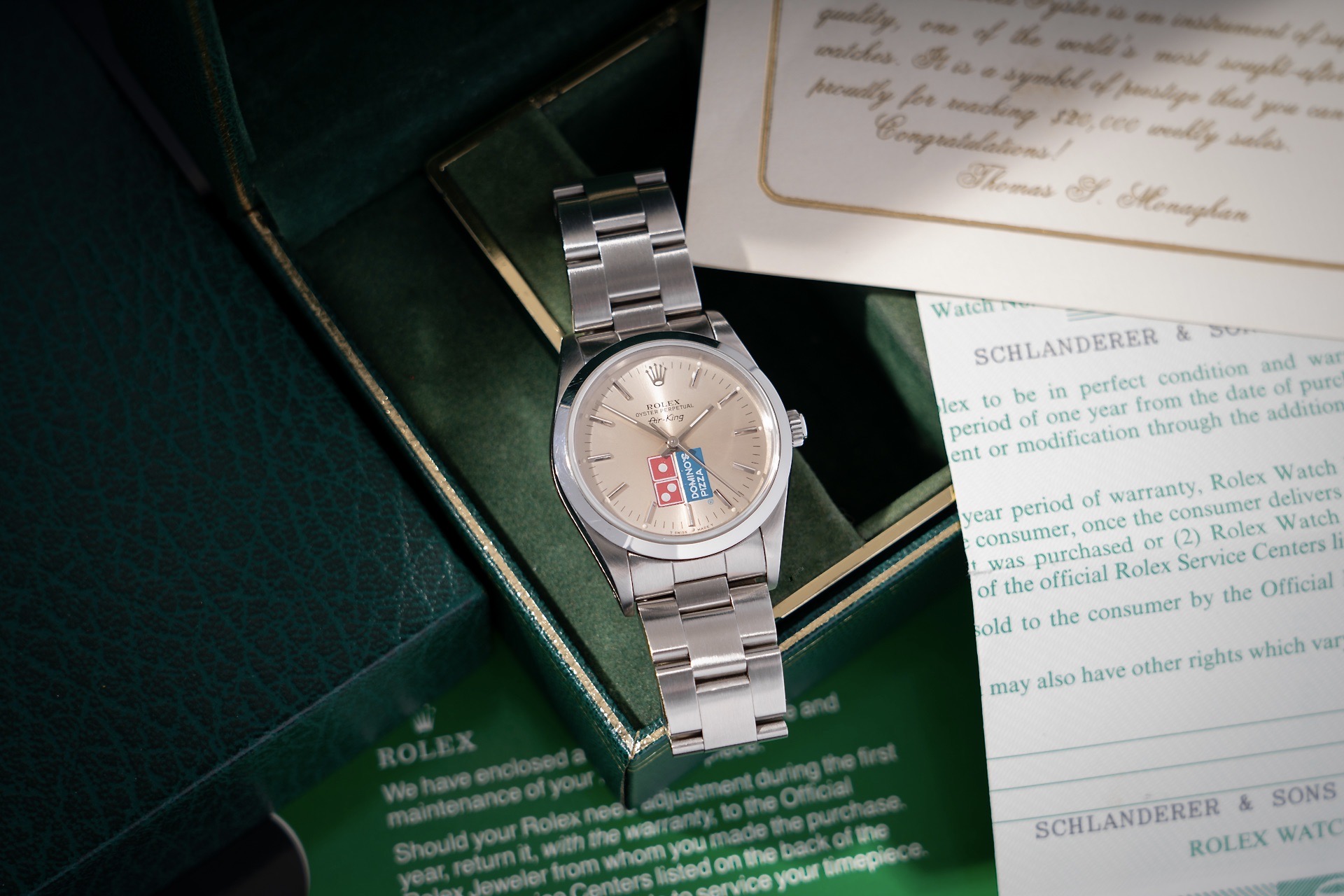 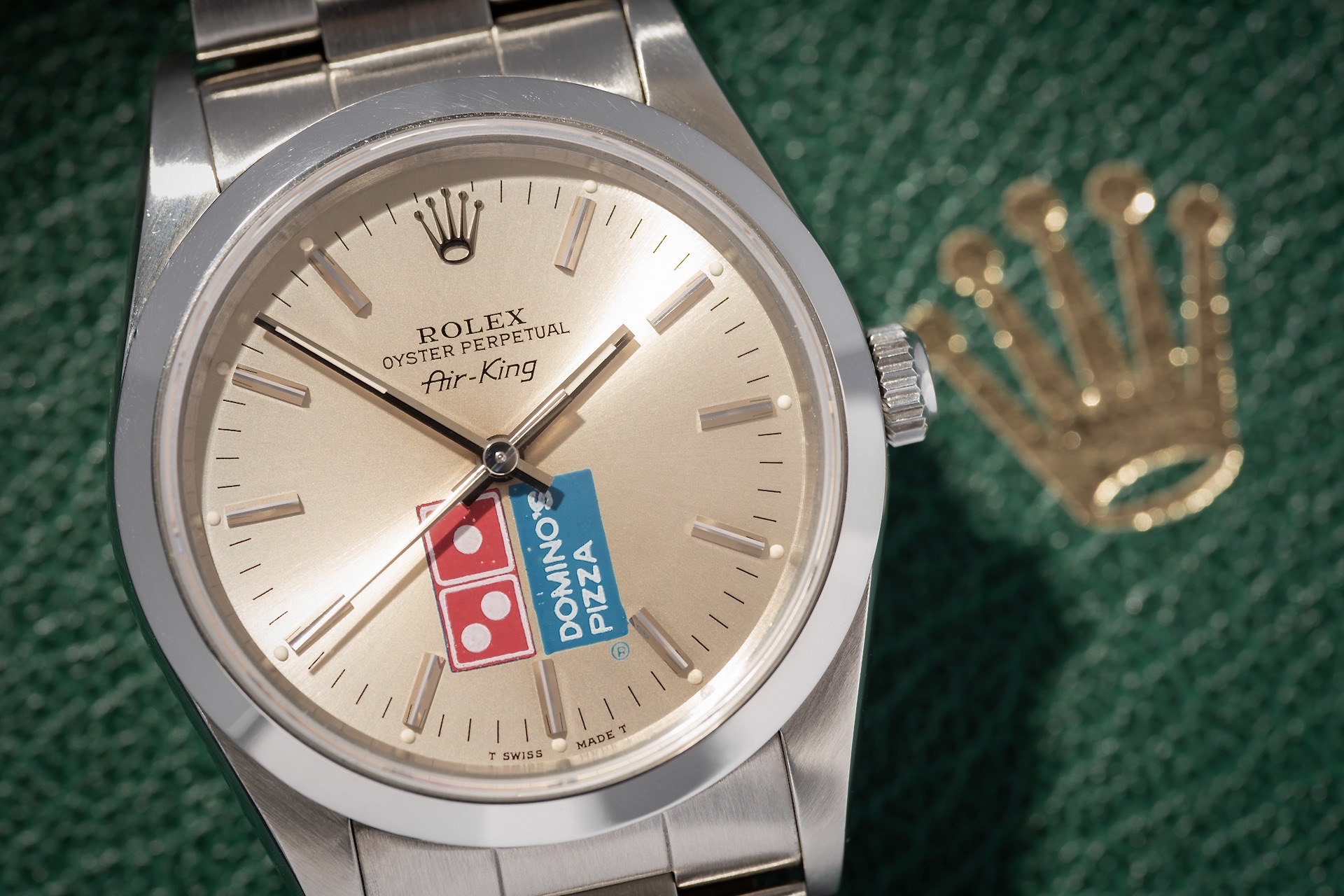 “The Rolex Air-King epitomizes Rolex’s privileged ties with the world of aviation during its golden age in the 1930’s. It was a period when spectacular progress in aircraft performance constantly expanded humanity’s capacity to conquer the skies, and led to the introduction of long distance flights”  Rolex

So, the Rolex Air-King pays hommage to the golden age of aviation, but don’t rule out the fun fact that this watch was also used to reward frenchise holders of the Domino’s Pizza brand. Once the franchise holder exceeded $20.000,- in weekly sales, he or she could expect an elegantly printed note on their desk, congratulating the recipient with a wonderful new timepiece, or as the note read; ” You are now part of a select group that wears a Domino’s Pizza Rolex Oyster watch as a banner of achievement. The Rolex Oyster is an instrument of supreme quality, one of the world’s most sought-after fine watches “. Domino’s Pizza started this tradition of handing out these Rolex bonuses back in the seventies or eighties. Most likely many franchise holders were given these cobranded Air-kings for hitting certain sales numbers, but not many have serviced into the ‘private market’, today only a handful can be found and I’m sure most are still with the franchise holders themself and are being worn or kept tucked away in a safe. The example shown here is a Domino’s Rolex from 1990 with a less-seen ‘straight’ Domino’s logo (rather than the tilted one we see more often). Only a handful of these are available worldwide at the moment, making these even more rare, also considering the fact that the branding design changed a few times during the Domino’s Air-King run, from the straight logo to the tilted, to the last known Domino Rolex design, which were watches delivered without a logo on the dial at all. Instead, Rolex chose to mount a Domino’s logo charm on the bracelet, just below the six o’clock position.

These Domino’s Rolex Air-King watches are just the right mix of 80’s and 90’s nostalgia and charm, paired with the rare sight of a logo dial which are no longer made by Rolex today. This Air King remains in a very solid condition with a sharp case and an Oyster bracelet without stretch, most likely the entire watch remains unpolished. Besides the overall condition, the watch is accompanied by all the original goodies such as the boxes, warranty papers, and even that nice note one would find on their office desk. Oh, also take a good look at that gorgeous champagne dial, it’s always one of the nicest dials inside an Air-King and one hell of a Rolex Oyster – especially when you got it as a gift.

Don’t hesitate to schedule in your appointment to view this rare Rolex Air-King Domino’s.. Who knows, we might even order some pizza..